One Good Turn Deserves Another … Or Problems Multiply.

Jim Loomis February 19, 2014 Amtrak, Long-Distance Trains 0 Comment
It takes time to turn a train. By that, I mean doing everything that needs to be done to the consist when it arrives at its final destination to get it ready to start out on its return trip.
The train must literally be turned around. Then it’s cleaned. Trash receptacles are emptied, carpets vacuumed, lavatories disinfected and floors mopped. The kitchen in the dining car is given a thorough going over. The whole train is run through a giant car wash so the windows are clean. 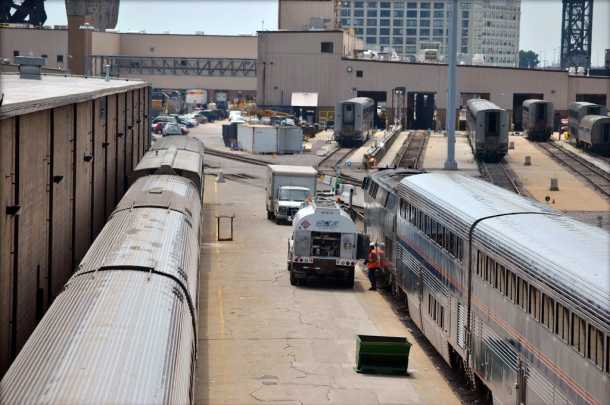 Any mechanical problems that may have cropped up on the inbound trip need to be addressed: a bedroom door came off its track, a toilet in a coach won’t flush, the coffee urn in one of the sleepers doesn’t work, and a refrigerator in the dining car isn’t cooling properly.
The Lounge Car has to be restocked and a veritable supermarket full of food and other supplies is loaded and stored in the dining car… everything from steaks and half-chickens and hamburger buns and little packets of catsup to napkins and silverware and those half bottles of merlot I have with my steak.
In the sleeping cars, old linens – sheets, pillowcases and towels – must be collected and replaced with a clean, fresh supply. Then all the berths have to be made up, as many as 44 in each Superliner sleeping car.
Meantime, the locomotives have to be inspected, refueled and … well, you get the idea.
If we’re talking about the Empire Builder, the eastbound train is due into Chicago at about 4:00 p.m. and is scheduled out, heading west, the following afternoon at 2:15. Allowing time for unloading and then boarding, let’s say that while that consist is in Chicago, Amtrak has maybe 20 hours to inspect, service, clean and restock two locomotives, a baggage car, a dorm car for the crew, three coaches, three sleeping cars, a lounge car and the diner.
Of course there are other long-distance trains to deal with, too: the Lake Shore Limited and the Capitol Limited headed east; and the western trains — the California Zephyr, the Texas Eagle, and the Southwest Chief. Don’t forget the City of New Orleans. And of course, today being a Thursday, the Cardinal will be going out, too.
But now let’s add another element to all that organized chaos: Let’s say that today’s Empire Builder gets to Chicago seven-and-a-half hours late. That means your Chicago crews no longer have 20 hours to get it ready for the return run to Seattle and Portland; now they have only 12½ hours.  Under those circumstances, it’s amazing that most of the long-distance trains are still departing from Chicago on time.
By the way, I don’t know if the Empire Builder will be arriving in Chicago 7½  hours late today. But, with 85 miles still to go, it was seven hours late when it finally got to Milwaukee.

Previous Did Elected Officials Get B.S.* from BNSF about the Empire Builder?
NextRule Number One: Keep Your Seatbelt On!