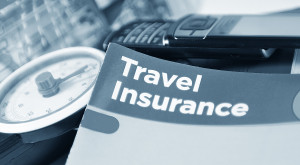 For years, I never bothered with travel insurance. It can be expensive – especially the so-called deluxe policies – and I just didn’t think it was worth the money. I mean, what are the odds that you’ll get seriously ill or have some kind of accident that requires hospitalization. Or even need what the insurance companies refer to as “evacuation”.
Well, I’ve changed my mind. Partly because I’m getting older and more rickety, and partly because of an old friend of mine.
Doug and his wife were vacationing in France.  On their second day there, she tripped walking down a stairway, broke her leg, and was taken to a hospital in Dijon where the bones were set.
However, Doug had her X-rays emailed to an orthopedic specialist back in Honolulu who recommended additional surgery.  He urged them to return home  as soon as possible and also said it was essential that she keep her leg elevated during the long return flight because of the very real danger of a blood clot. That meant flying first class from Paris to Los Angeles and again from LA back to Honolulu. Bottom line: nineteen thousand dollars!
A travel insurance policy would have cost a few hundred dollars and would have covered all their medical expenses in France, plus the cost of their “evacuation” back home. Doug says they will never again travel without that insurance.
With Doug’s experience in mind, I bought my first-ever policy before leaving on my recent trip to the east coast. And guess what? I developed a bad cough and by the time I was en route from Montreal to Toronto, I really needed to see a doctor.  I called the insurance company’s help line, they located a doctor in Toronto who knocked on my hotel room door not more than an hour after I checked in. He examined me, prescribed some antibiotics, and a few days later the cough had all but disappeared. The cost of his visit was $350.  The cost of my travel insurance policy was $48 and it will reimburse me for the doctor’s visit.
In September, I’m planning a month-long trip to Europe.  Will I buy travel insurance? Does a bear poop in the woods?

Previous Amtrak’s Boardman Speaks to Congress, and Offers a Few Pearls.
NextPicking the Right Hotel Takes Time…But Is Worth It.