The Sad Tale of an Irresistible Rock and an Immovable Hard Place.

Jim Loomis August 08, 2012 All Posts, Congress, Politics 1 Comment
We’re leaving in a couple of days for a two-week trip that will take us deep into the Canadian Rockies.

The first segment will be aboard a train that’s been on my bucket list for years, the Rocky Mountaineer. We’ll depart from Vancouver on Monday morning, arriving in Banff the following evening in time for dinner. 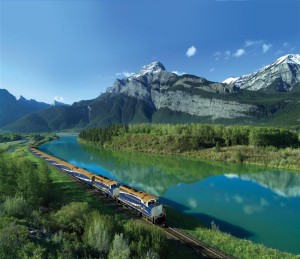 I’m looking forward to almost everything about this vacation. Except the part about crossing the picket line.

The problems began over a year ago as the Rocky Mountaineer was gearing up for the 2011 tourist season. Back then, the railroad’s employees had voted to switch their union representation … to the Teamsters. Within a few weeks, a list of employee demands was presented to the Rocky Mountaineer management.

The merits of the demands were essentially irrelevant because any discussion would necessarily involve a toxic combination of philosophies and personalities. On one side there was a take-no-prisoners labor union under pressure to produce on promises made to the employees during the representation election. On the other side, you had the owner of the Rocky Mountaineer, Peter Armstrong, clearly a man of wealth with a forceful, independent make-up … not to mention a well-known and influential mover-and-shaker in Canadian politics. 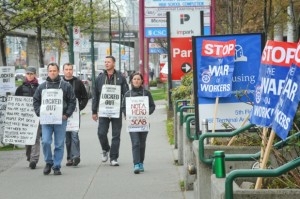 What happened was 100-percent predictable: there was no agreement. Then the company locked out its employees and hired replacement workers. The union cried foul and set up picket lines. That was well over a year ago and, as I understand it, there have been no meaningful discussions since.

Both sides would do well to consider the Congress Plaza Hotel in Chicago. There was a similar labor dispute there and, as we speak, pickets are marching back and forth with their “UNFAIR” signs in front of the hotel’s main entrance on Michigan Avenue. But here’s the thing: They’ve been marching for more than ten years.

I guess my best advice for both the Teamsters and the Rocky Mountaineer ownership would be to suck up a little pride, sit down together in private, and keep talking until a reasonable agreement is reached. Anything else is just being stubborn. And stupid.

Previous Opponents of Honolulu’s Rail Transit Project Have No Shame.
NextAnd … They’re Off!