Jim Loomis July 14, 2012 Amtrak 2 Comments
As everyone knows, large parts of the country were hit by a series of bad storms around the end of last month. There was a great deal of damage to personal property and all the downed trees raised hell with the power grid. The result was almost unprecedented. 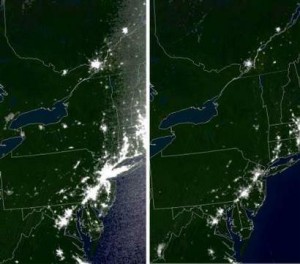 This extraordinary photo clearly shows the huge area in the northeast that was without power. Repair crews were mobilized from power companies hundreds of miles away, but in many areas the blackout lasted for days. It couldn’t have come at a worse time. A terrible heat wave over much of the country and the lack of power meant food spoiled from the lack of refrigeration and millions sweltered because of the loss of air conditioning. It was a real mess. 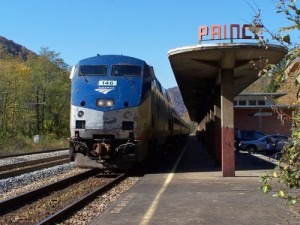 In West Virginia, hundreds of fallen trees brought rail traffic to a halt, including Amtrak’s Cardinal, which runs daily between New York and Chicago. With 232 passengers on board, one of the westbound trains was stopped at the station in Prince, West Virginia, and unable to proceed.

The dining car only had enough food remaining for one final breakfast, so a resourceful Amtrak employee headed to the Food Lion supermarket in the nearby town of Beckley to buy provisions for the stranded passengers. Charles “Chuck” Riecks, a member of the National Association of Railroad Passengers and also of NARP’s Council of Representatives, was on the scene to assist in any way he could and reports that the Food Lion store manager refused to accept any payment.
It was a wonderful gesture, especially since the entire area was struggling with all the unpleasant consequences of damage from the storm’s wind and rain, including the loss of electricity.
And there’s an ironic aspect to this story: those 232 passengers were the only people for miles around able to keep cool in air conditioning which was provided to the Cardinal consist by the “head end power” from the locomotive!