More Amtrak Service Between LA and New Orleans? Yes, It Could Be Happening!

Most of Amtrak’s long-distance trains run daily. Just two trains – the Cardinal (New York-Chicago) and the Sunset Limited (Los Angeles-New Orleans) run three days a week, although there has long been talk about increasing both to a daily schedule. 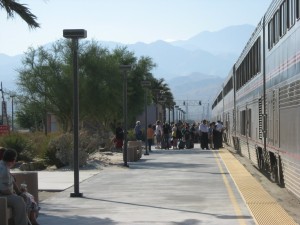 The eastbound Sunset Limited stops to pick up passengers in Palm Springs, California.

The Sunset Limited, operated for years between Los Angeles and Florida, most recently to Orlando. Then came Hurricane Katrina, which wiped out and undermined a lot of the track through Mississippi and the Florida panhandle. Of necessity, then, the Sunset began terminating in New Orleans.

Considering the scale of the project, the track was repaired quickly, but Amtrak has never resumed the New Orleans-Florida segment of the Sunset’s route, even when prodded to do so by Congress and by rail passenger advocacy groups such as NARP, the National Association of Railroad Passengers.

A new plan is beginning to emerge, however, which could provide daily service between Texas and Los Angeles. In the current schedule, the daily Texas Eagle (Chicago-San Antonio) joins the Sunset Limited in San Antonio where, three days a week, it becomes one train from there to Los Angeles. The proposal being kicked around would run the Eagle every day all the way to California – three days a week as part of the Sunset’s consist, and as the Eagle on the other four days. A new connecting train would provide service between San Antonio and New Orleans, presumably on the four days each week when the Sunset does not operate. (Confusing, eh?)

It’s estimated that the new daily service between San Antonio and the West Coast would bump ridership along that route by more than 100,000 passengers a year, which would also improve the financial performance of the train.

No word yet, but some decision is likely within the next several months. Fingers crossed, everyone!