Growing Up With the Red Sox and Curt Gowdy. 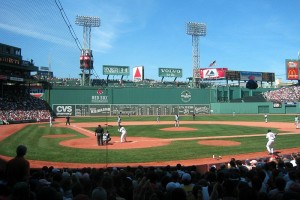 I saw my first Red Sox game in Fenway Park on May 25, 1946, and have been hooked on the Sox ever since. Boston was about 100 miles north of where we lived and we usually managed one trip a year to see one or two games. The rest of the time, we caught the games on the radio … every game, day or night, with play-by-play provided by the incomparable Curt Gowdy who, apart from my father, was probably the most important man in my life back then.

I used to steal the cardboards out of my dad’s white shirts after they came back from the laundry and use them to make my own scorecards, drawing the lines with a ruler to form the boxes, making sure I left room for possible substitutions and extra innings.

I used the white side of the cardboard for the Sox and the reverse side, which was darker in color, for the opposition. Unless, of course, the Sox were playing the Yankees. I refused to keep score for the Yankees’ half of the games.

I still try to visit Fenway Park every year to see a few games. And I enjoy watching most of the rest on my new high-definition, wide-screen, state-of-the-art television set. But nothing can compare with those long ago nights, lying in the darkness of my bedroom, listening to Curt Gowdy’s description of those games. A TV set with a picture that clear has yet to be invented.