Not a Good Week for Amtrak.

Andrew Selden is a bonafide authority on passenger rail and his thoughts on Amtrak’s still-rather-new management team are presented in a column featured in the July issue of Railway Age magazine. This is the link. I will not spoil it for you by quoting from Andy’s column. Suffice it to say the title of his column is “No Way to Run a Passenger Railroad” and in the column, the policies of Amtrak president and CEO Richard Anderson are pretty thoroughly criticized. 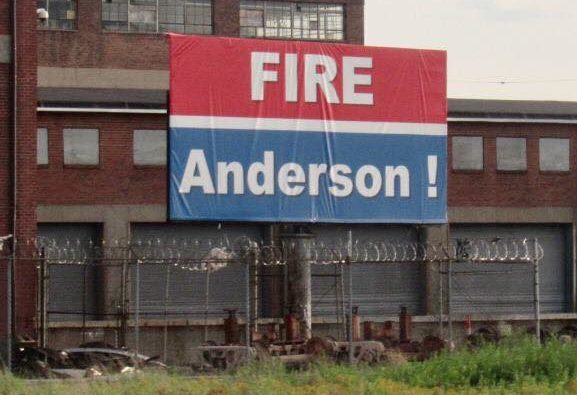 A “Not Wanted” Poster

Anderson is taking his lumps on Facebook and elsewhere throughout the social media. Also from large sign that has appeared on a building near Philadelphia. I’m told the sign is clearly visible from Amtrak trains passing nearby.

One of the eastbound Zephyr’s locomotives crapped out near Winnemucca, NV, last week and things snowballed from there. The borrowed locomotive helped, but held their speed down. The replacement Amtrak engine arrived when they were sitting on a long stretch of single track; then the engineers “went dead” and there was a long delay in getting a replacement crew; once moving again, they hit a car at a grade crossing. Net result: they were eleven hour late and still several hours from Chicago.

And finally, the cold boxed meals are not sitting well with veteran Amtrak travelers. One such person posted a critical review of his most recent trip aboard the Lake Shore Limited and concluded as follows: “From my first ride in 1953 through this past June 2018, I’ve put in what seems like a million miles by rail, but I won’t be riding many more trains from this point on ─ no long trips anyway.”

Previous Our Number One Problem.
NextThere’s a Downside to Term Limits.