“Recline Rage” Incidents Are an Increasing Problem for the Airlines.

Jim Loomis September 11, 2014 Amtrak, United Airlines 1 Comment
A week or so ago, I posted about an altercation on a United flight that occurred when a guy slipped little devices called the Knee Defender onto his tray table supports. They prevented the woman seated directly in front of him from reclining her seat, thus preserving what little legroom the male passenger had. Unfortunately, the lady took umbrage, there was a heated exchange, and she doused the guy with a cup of water. The flight was diverted to Chicago and the two people were escorted off. 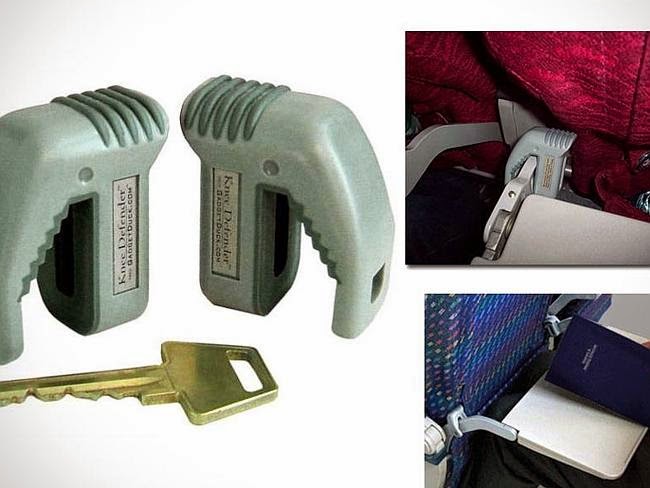 Since then there have been at least two more similar incidents of recline rage. Both involved the very same Knee Defender and, in each case, the flights were diverted and the recliner and the reclinee were presumably booted from the plane.

(Incidentally, I had no idea how common it is for planes to be diverted. According to aviation sources, in the 12-month period ending June 30th, almost 15,000 flights operated by U.S. airlines were diverted. That averages out to almost 41 a day, although only a handful of those are the result of problem passengers. The rest are because of some minor issue causing the captain to “err on the side of caution”.)

The average amount of space between rows for all U.S. airlines is 32 inches, with Jet Blue and Virgin America offering the most with 35 inches. Spirit Airlines is at the opposite end of that spectrum, giving their passengers all of 28 inches between rows. Ironically, Spirit is a profitable operation which just goes to prove that price is what people care most about. Not me. I’m just too old and tired and cranky to sit for five-plus hours with my knees up under my chin to save $40 on the air fare. 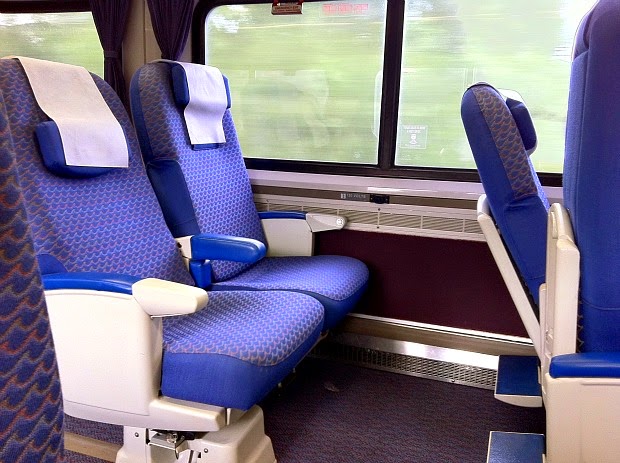 Of course I can’t resist taking this opportunity to note that legroom is definitely not a problem for those of us who choose to travel by train. Seats in coach class on Amtrak are at least as large as the first-class equivalent offered by the airlines. And, as you can see, there’s plenty of room to stretch out.
Getting back to the recline-or-not-to-recline issue, there are two U.S. airlines that don’t have to deal with the problem at all. Seats on Allegiant Air and Spirit simply do not recline … at all. Not an inch. Allegiant did away with reclining seats eight years ago and Spirit followed in 2009. They did it, of course, to reduce the legroom by a half inch or so between rows, making it possible to squeeze one more row of seats into each plane. Six more seats times the number of planes in the fleet times the number of flights in a day and — to once again quote the comment attributed to the late Senator Everett Dirkson, ” … pretty soon you’re talking real money!”
Slice and dice any way you want, but the fact is, to make a few extra bucks, the airlines are deliberately inflicting discomfort on their paying customers. Show me another industry that could get away with that!

Previous Life in Economy Class Ain’t What It Used to Be.
NextAmtrak Trains Offer Great Viewing for Fall Colors.