Jim Loomis June 09, 2013 Amtrak, Bullet Train (Shinkansen), France, High-Speed Rail, Maglev (Magnetic Levitation) 0 Comment
The Japanese started it all back in the 60s when they introduced the first so-called bullet trains, the shinkansen. The French followed with their TGV, the abbreviation for train à grand vitesse, which translates literally as “high-speed train”. Today, high-speed rail has become the preferred means of travel for most of the rest of the world as just about everyone knows.
Conventional high-speed rail uses time-tested technology, with the trainsets powered by electricity drawn from overhead wires (the catenary). That’s the way it works in Japan, in France and, for that matter, that’s how Amtrak’s “higher-speed” trains are powered  along the Northeast Corridor between Boston and Washington.
The next step up in terms of technology is magnetic levitation, known as maglev. It uses electrically powered magnets to lift the train off the guideway and move it forward. Because there is literally no friction, maglev trains can attain very high speeds. 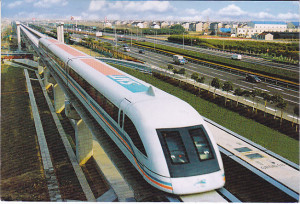 Until recently, the only operating maglev train is in Shanghai (photo above). It carries passengers between downtown and Pudong International Airport. It’s only an 18-mile trip, but the train does reach speeds of close to 250 mph.

I rode this train two years ago. Since maglev is often described as “riding on a cushion of air”, I was expecting a smooth, quiet ride. It was neither. In fact, I had to steady myself by holding onto a seatback when taking a photo of the digital display showing our speed. Still, it was an interesting experience. 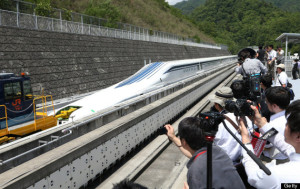 But now the Japanese have announced plans to build a true maglev system which, they say, will be operating between Tokyo and Nagoya by 2027.  The new maglev train will operate at speeds in excess of 300 mph which will reduce the running time on that route from 90 to 40 minutes. Here’s the thing: a prototype has been built and is being run on a test track! (Photo above)
In the meantime, led by Rep. Jeff Denham of California (he represents Modesto and part of the San Joaquin Valley), Republicans in the U.S. House are working overtime trying to cut off federal funds for California’s conventional high-speed rail project … which, if it’s ever built, would be our country’s first.
How does it feel being a laughing stock in the eyes of most of the rest of the world? Makes ya want to cry, doesn’t it.

Previous Congress Should Stop Picking on Amtrak’s Long-Distance Trains.
NextWhen It Comes to Trains, Railfans Can Be Real Fanatics.