When It Comes to Trains, Railfans Can Be Real Fanatics.

Jim Loomis June 11, 2013 Amtrak, Good Guys & Bad Guys 2 Comments
One of my friends recently referred to me as a “train nut.” I do enjoy train travel and have logged a great many miles on Amtrak, but my interest in trains pales into insignificance compared to the real enthusiasts. There are folks out there who have turned their fascination for trains into a hobby – sometimes a consuming one.  They call themselves railfans, but they’re often referred to as foamers by railroad employees, meaning that they supposedly begin to foam at the mouth whenever they see a train.

For some of these folks, the interest is broad and general; for others, it gets pretty narrow.  There are people who collect old railroad timetables, for example. Or dining car menus, tickets, posters, or other memorabilia. (I’m certainly not a collector, but I do have a coffee cup and saucer — real china! — that dates back 40 years to Amtrak’s very beginning.) Many of the serious rail fans can glance at a passing freight locomotive and tell you who the manufacturer was, how much horsepower it can generate, how many were purchased by the railroad … and on and on. 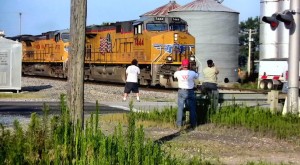 During almost any train ride, you’ll see railfan photographers by the tracks taking your picture as you roll past.  Others are train spotters who spend their free time checking off locomotive numbers in notebooks, the object being to have spotted every locomotive of a certain series or all the locomotives owned by a certain railroad.
A few railfans allow their passion to get in the way of their good judgment.  They’ll be found wandering around in areas of rail yards that are restricted to railroad employees only.  And some “collect” the builders’ plates which are attached to every coach and sleeping car by the manufacturer.  The sad fact is, very few passenger rail cars still have the original plates in place. 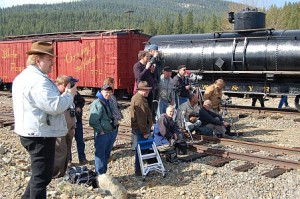 Largely because of these illegal or unauthorized activities of the very few, railfans occasionally run into open hostility from some railroad people, but much more typically, they’re treated with friendly tolerance.  In particular, when it comes to passenger trains, railfans have become genuinely appreciated.  After all, as one veteran Amtrak road foreman pointed out, it’s the railfans who write all those impassioned letters to members of Congress supporting rail travel in general and Amtrak in particular. And good for them, too!