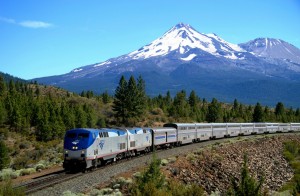 For years, Amtrak’s long-distance trains have constantly come under fire from people in Congress whose objections are based on a conservative ideology that opposes almost any government subsidy as a matter of principle.
The rejoinder to that is, I think, pretty simple: why pick only on Amtrak when all other forms of public transportation are subsidized by government?
Are the airlines really subsidized? Well, the federal government pays for the air traffic control system; state and municipal governments pay for building and maintaining airports; and the airlines get direct payments from the feds to operate lots of air routes linking small towns and cities all across the mid-west and west.
Municipal transit systems – whether buses or subways or elevated railways – are all heavily subsidized by the cities or counties or states in which they operate.
The federal gas tax is supposed to pay for the cost of highway construction, but only covers about half. The other half comes right out of the general fund … and that is a subsidy.
Are their bike paths in your town? And are special bike lanes marked out on your city streets? Money spent to build and maintain them is subsidizing a form of public transportation. 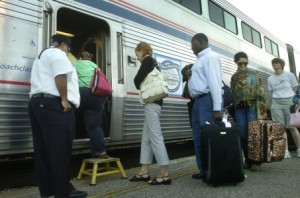 But, getting back to Amtrak’s long-distance trains, the politicians who don’t like subsidizing them almost always have the wrong impression of their purpose. They think, for example, that trains like the California Zephyr or the Coast Starlight are filled with affluent older folks traveling all over the Great American West largely at taxpayer expense. Well, one of our NARP* Council members, Matt Fels from Forth Worth, Texas, has done an analysis of ridership on Amtrak’s long-distance trains that clearly shows that to be a false assumption.
Matt found that only one-fourth of all coach passengers and just half of the sleeping car passengers are traveling between two of the nation’s 25 largest metro areas … Chicago to Dallas, or Minneapolis to Seattle, or New York to Miami, for example. That means all the rest of those passengers boarded or got off their train at one of the smaller cities or towns somewhere along the train’s route.
In other words, Amtrak’s long-distance trains are part of this country’s public transportation network. And, by defination, public transportation is subsidized!

Previous Ask Not for Whom the Whistle Blows … Perhaps It Blows for Thee.
NextHigh-Speed Trains: Fast, Very Fast, and Now REALLY Fast!