Just Another Run-of-the-Mill Saturday in Boston

Jim Loomis April 28, 2013 Baseball 1 Comment
It’s become my habit when visiting here to stay at a little bed-and-breakfast on Bay State Road. It’s a perfect location because it’s just a 10-minute walk to Fenway Park. There are several decent restaurants nearby, including — of course! — an Irish pub, and, just up the street at number 135, is what used to be my old Sigma Phi Epsilon fraternity house. I can’t tell who’s in there now but, more than 50 years later, it looks just the same from the street. 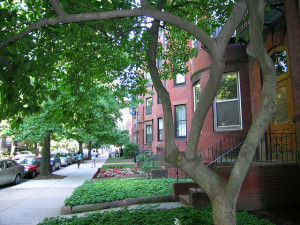 The B&B also seems to attract interesting guests. When I walked into the breakfast room this morning, there were three people sitting around the large table having coffee. All three are attending a mathematics conference at nearby Northeastern University. One is French, another is German, and the third is from Japan. All were chatting quietly in English. A few minutes later, a woman came down the stairs and joined us. She’s currently living on the west coast, but she’s Russian, originally from St. Petersburg. Not a bad way to spend a leisurely Saturday morning breakfast.

It’s a short walk from the B&B to Fenway Park, maybe 10 minutes in all. I just cross Kenmore Square, head up Beacon Street which crosses over the Mass Turnpike. There’s a huge billboard facing the turnpike that calls for a ban on assault weapons. One section of the billboard keeps a tally of the number of children in this country killed by guns since the 2012 election. Walking across the bridge on the way to the game, the number was 7240. On the way back, a little over three hours later, it was 7247. 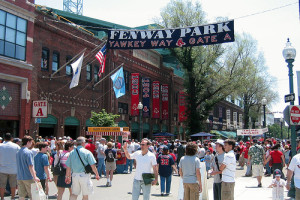 The main entrance to the ballpark is on the north side of Yawkey Way. On the other side of the street is a row of souvenir shops selling caps, T-shirts, jackets and every other conceivable kind of garment and nicknack, all featuring one of the recognized Red Sox logos.
But after the game, back in Kenmore Square, unofficial merchandise is being aggressively peddled by vendors who harangue the crowd while standing precariously on top of wooden crates. Since the terrible bombing on the day of the Boston Marathon, this city has adopted a simple, defiant theme: B Strong! The “B” is, of course, rendered in the colors and style of the lettering on Red Sox uniforms.
There was a memorial ceremony on the field before the first Red Sox home game following the bombing. Red Sox slugger David Ortiz, a local hero, took the microphone and, his voice taut with emotion, uttered the words that immediately went to the top of the list of all-time quotes in Boston sports history:
“This jersey we’re wearing today doesn’t say ‘Red Sox’, it says ‘Boston’! This is our fucking city … and nobody is going to dictate our freedom. Stay strong!” The old ballpark erupted in cheers.
Last night, the peddlers on the street were offering T-shirts emblazoned with the key phase from the Ortiz quote. They were selling like hotcakes.

Previous Annual Visit to Fenway Park is a Roll of the Dice, Weather-wise.
NextNew York to Montreal Aboard Amtrak’s Adirondack