Jim Loomis April 30, 2013 Amtrak, Baseball, Hawaii, Memorable Moments, VIA Rail Canada 2 Comments
On Sunday, I left Boston and returned to New York City in order to catch Amtrak’s Adirondack to Montreal on Monday. I was joined in New York by my brother-in-law, Peter, who took the Hawaiian Airlines non-stop from Honolulu to JFK … an 11-hour red-eye. It’s a great airline, but that’s just too long!
We had tickets to an off Broadway show and on the way to the theater we stopped off at a big music store, packed to the ceiling with guitars and other stringed instruments. Peter plays the guitar, so he and I gravitated to a closed off room in which all the acoustical instruments were displayed … mostly guitars ranging in price from under $200 to as much as $4,000.
While Peter and I were chatting with the owner of the store, one of us happened to mention that we were from Hawaii. The man looked startled, then pointed to three young men in conversation with the other salesman. “These three kids,” he said, “are from Hawaii, too.”
So all five customers in the acoustical guitar section of a big Manhattan music store happened to be from Hawaii. And one of those three is from Maui. What do you suppose the odds are for something like that! 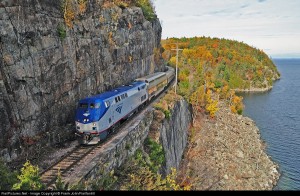 Aboard the Adirondack, it soon became apparent why it’s known as on of Amtrak’s most scenic trains. From New York City up to Albany, some 140 miles, the train runs along the Hudson River. Then, still heading due north you enter horse country with a stop at Saratoga Springs. The surrounding horse farms are immaculate with what sure seem to be miles of beautiful wood rail fences.

Next comes Ticonderoga where you can still just drive in and walk around in that famous stone fortress. The trees lining Bay State Road in Boston had leafed out, but we’re 250 miles farther north now and the trees here are still bare. Still, as the train slows and runs around the perimeters of several lakes, it’s easy to imagine what this trip must be like she the Fall colors are at their peak.

Finally, we reached the Canadian border. It took their border officials 90 minutes to clear us, but evidently that’s typical because, after crossing the impressive St Lawrence River, we arrived at Montreal’s station just two minutes behind schedule.
Now it’s Tuesday morning and, in a bit over an hour, we’ll be on one of VIA Rail’s speedy corridor trains en route to Toronto. Tonight? Red Sox vs. Blue Jays. So it’s train travel and  baseball. What’s not to like about that?

Previous Just Another Run-of-the-Mill Saturday in Boston
NextVIA Rail Takes Us to Toronto and a Hotel with a Fascinating Venue.