Day 13-18: Train from Moscow to Irkutsk in Siberia.

Apologies going in. It’s been a week since the last post and I have just spent an hour downloading over 200 photos into the laptop (after weeding out an embarrassing number of dark, blurred, badly-framed, totally uninteresting or otherwise unworthy shots). It’s 10:30 p.m. here in Irkutsk and the relentless people running this train have us out of here at 9:00 tomorrow morning. This will be rushed.

Tonight I’m going to focus pretty much on the train. It is operated by the Lernidee company of Germany which has provided the multi-lingual tour guides, and the on-board crew which, including car attendants and dining car staff, is all Russian. English is limited to a handful of words, but nevertheless it’s all working. 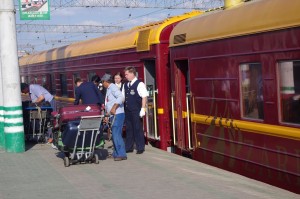 It’s a big train. There is a baggage car, a couple of crew cars, and what seems to be a supply car for bottled water, linens, towels, dining car supplies, etc. There are no less than three “restaurant cars” and that leaves 14 sleeping cars for a contingent of passengers that are divided into three groups: English Speaking, Spanish Speaking and German Speaking. 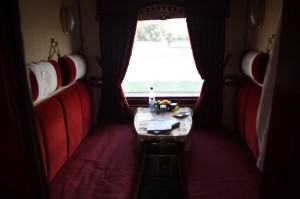 My cabin, which I occupy in solitary splendor, is reasonably spacious. The seats turn into beds at night, which means they are quite narrow. It was a minor problem the first night; none at all since. There is a knob cleverly concealed in the fancy trim above the window that controls what they call “the radio”. It’s a public address system which, on the precise dot of 7:00 every morning, pours out rousing Russian songs. (Is there another kind?) I have ratcheted the knob full left and can barely hear it now. But it lifted me right off the bed that first morning. 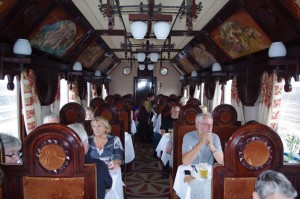 The meals are … well … OK. There are several courses, most of which can be readily identified, but often include booby traps. Yesterday’s lunch began with a cabbage and beet salad – in a kind of slaw presentation – but which also contained small pieces of herring. I do not care for most fish, especially “fishy” fish, and herring is now all alone in undisputed possession of first place on my Most-Disliked-Fish list. The main entrées vary, but are usually pork, chicken or fish.

Both at lunch and dinner, we can count on cabbage in at least two different forms … that is, first in a salad and then showing up again minutes later in a soup. There are potatoes, of course, usually boiled, and probably carrots, also in the salad and repeating in the soup. The chefs do a pretty good job of varying the soup base, however: it’ll be beef today, chicken tomorrow and something else (but neither beef nor chicken) the next day. Oh … and someone back there has a very heavy hand with the dill … on everything but desert. 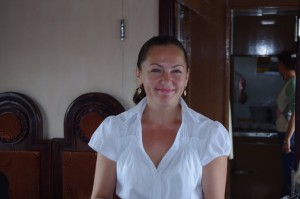 All that said, and allowing for me having a bit of fun with this, the meals are certainly nutritious, well prepared and, while perhaps not to the typical American taste, are perfectly fine. Further, they are dished up by a very professional, very efficient and ever-smiling pair of Russian servers, especially a delightful young woman named, of course, Svetlana.

We are off again tomorrow, and it will be another several days before I again have internet access. I will do my best.