We have seen only a small part of Siberia, a narrow slice running west to east from Kazan through Nowosibirsk and Irkutsk to Mongolia. In the process, our train has covered just under 6,000 kilometers.

My first and most overpowering impression seems to be universally shared with the rest of the group: Siberia is nothing like we expected. It’s big, of course, and the cities we have visited are separated by vast stretches of forests briefly interrupted by tiny villages whizzing by every hour or so.

But those cities, most of which we have never heard of before, are modern metropolises in every way, many of them with well over a million inhabitants. There are metro systems, six- and eight-lane boulevards, flashy hotels, apartment and townhouse complexes, and shopping centers teeming with customers, most chatting on cell phones or busily texting as they go. And it’s all going on literally in the middle of Siberia. Who knew?? Here’s a quick example from just two days ago. 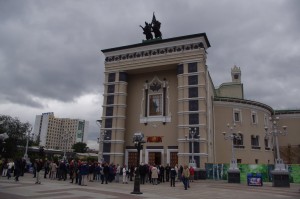 This is the Opera-Ballet Theater in Ulan Ude, a city of some 400,000 people which lies less than 300 miles from the Mongolian border. (Everyone who has ever heard of Ulan Ude raise your hands.) The building was recently re-opened after several years of extensive renovation. It’s a magnificent structure located just off the main square and we were all invited to a special performance featuring local singers and dancers – some clearly Caucasian, others Asian and Mongolian – performing works by Puccini, Tsaichovsky, Bizet and Andrew Lloyd Webber. Again: Who knew??

That said, not everything is coming up roses here. Most ordinary people have to work very hard and are just getting by. The effects from the collapse of Communism are sill being felt: factories that employed thousands of people producing helicopters or cars or dishwashers upon direction from Moscow have struggled and often closed down when left to sink or swim in this scary new world of free enterprise. 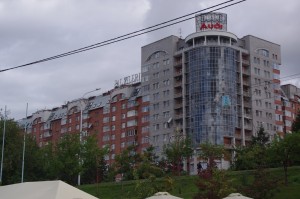 There are plush, spacious apartment buildings – this one is in the city of Krasnoyarsk – but they are far beyond the means of average working people. Who lives there? Government officials, managers of what factories are still operating, and business entrepreneurs, universally described here by our local English-speaking tour guides as “merchants”. 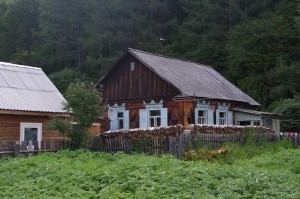 Ordinary people, especially those who live in the countryside, have quite a different existence. Small houses, most with outhouses, family garden plots, dirt roads and most living a great distance from any city of any real size. This one is bigger and better than most.

And, of course, our diverse group hasn’t even scratched the surface. Several of us have agreed: All we can do is look, listen, take photos of what seems unusual or interesting to us, and come home with stories of this vast, surprising, multi-cultural, multi-faceted place. Because we now know that Siberia is nothing like what most people imagine. And it certainly isn’t the end of the world. In fact, it could well be at least a part of the beginning of a whole new one.

Previous Day 13-18: Train from Moscow to Irkutsk in Siberia.
NextCENSORED in China!