This will be my last post for at least a few days. We will be checking out of this hotel early in the morning for a day that will include a tour of the city, the highlight of which will be a visit to the Kremlin. Toward the end of the afternoon, we’ll be delivered to our special train and begin the rail journey through Siberia and Mongolia to Beijing.

However, because it’s unclear at the moment when I will next have access to the internet, it’s therefore equally unclear how soon my next post will appear here. I’ll do my best, of course.

In the meantime, our tour group met for the first time over dinner this evening. It’s billed as an English-speaking tour, and that’s true enough, but so far I have met Danes, Germans, Swedes, an Australian woman, and I spent dinner tonight chatting with a very interesting Norwegian couple. The wife was an exchange student for a year at a college in Pennsylvania which explains her near-flawless American-English.

After dinner – there was free champagne, by the way – we all piled into a bus and were driven to one of the amazing metro stops. Moscow is famous for its metro stations, each of which is spotlessly clean and of a different, elaborate and quite extraordinary design.
After a two-stop ride, we came up from about 150 feet below ground and, turning a corner, stepped out onto Red Square. 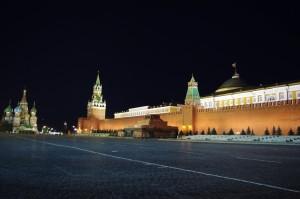 And there it all was: St. Basil’s cathedral, the massive Kremlin wall and, immediately in front of it, Lenin’s tomb. Maybe it’s my age or my interest in history or that I grew up during the Cold War, but I confess that I stood there and gawked for several minutes. And I said, quite out loud, “It’s really me … and I’m actually standing in Red Square.” It was, as we say in Hawaii, a “chicken skin” moment.

OK … more to come as soon as I can manage it.

Previous A Memorial: The Siege of Leningrad
NextDay 13-18: Train from Moscow to Irkutsk in Siberia.