We customarily watch the PBS News Hour in our house and last night they ran another segment on health care reform. One of their video clips featured John McCain at a town hall meeting listening to a rambling diatribe from a man who was mocking Congress for passing laws which, he sneered, are hundreds of pages long and which nobody understands. The crowd loved it. 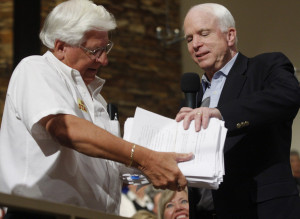 McCain took his cue and, waving a copy of the Senate’s version of the health care reform bill, informed the crowd in mock outrage that it was 660 pages long! The audience clapped and laughed uproariously.

Several years ago, my wife and I sat down with an attorney to prepare the wills, trust documents, health care directives and powers of attorney we need to avoid confusion and mistakes upon our deaths. It all came to a total of 64 pages.

Doesn’t it seem reasonable that the documents to reform the health care system of our entire nation would be a bit over 10 times longer than the end-of-life legal papers for just two people?

But instead of promoting — no, demanding — serious debate on a critically important issue, politicians like John McCain waste precious time pandering to the morons.

Of course, that’s the whole idea, isn’t it?