In my former life, I had occasion to travel to American Samoa and to the nearby independent nation of Samoa, then called Western Samoa. The islands that comprise both Samoas are about a five-hour flight south of Hawaii. Both are lovely and delightfully tropical. And both offer a seemingly endless number of cultural idiosyncrasies – many outsiders would call them peculiarities — which often confound and confuse visitors.

A friend of mine named George Wray ran South Pacific Island Airways, flying among the islands of American Samoa and to Western Samoa. Eventually George leased some jets and expanded to fly a couple of times a week between Honolulu and a number of South Pacific islands, including Samoa.

A month or so after SPIA began the trans-Pacific service, George realized that there were serious discrepancies in the bar service provided on board. Revenue from the sale of liquor didn’t come close to equally the amount of booze actually being served. Turned out that his predominantly Samoan flight attendants were culturally unable to charge any of their older “aunties” and “uncles” for drinks. It simply wasn’t fa’a Samoa … the Samoan way. George just shrugged and from that point on, all drinks were free on South Pacific Island Airways.
But I digress. 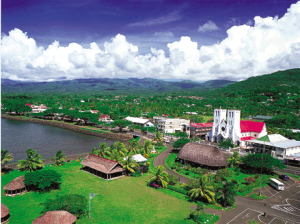 What prompted these thoughts was learning about a controversy currently raging in the charming, picturesque, quirky, independent nation of Samoa. The prime minister, Tuilaepa Sailele Malielegaoi, has decided that Samoan drivers will have to change lanes en masse and start driving on the left side of the road. The prime minister’s rationale has to do with his country’s close ties with Australia and New Zealand, where people drive on the “wrong” side of the road. There are a lot of Samoans living in both of those countries and apparently many ship their hand-me-down cars, with steering wheels on the right, to relatives in Samoa. 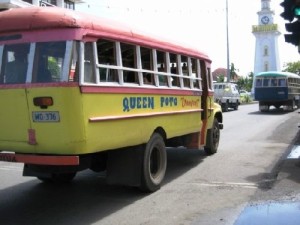 That tortured logic has failed to sway opponents, who point out that the change-over will come with a great many problems and a lot of expense. One example: After the switch, all the public buses and jitneys will find themselves discharging passengers directly into the middle of the road in the face of oncoming traffic. The only solution will be to reconfigure the interiors and cut new doors into the left side of all those vehicles.
So far the prime minister appears to be resolute and is, in fact, indignant that his decision is being challenged. After all, respect for elders and those in authority is fa’a Samoa.