And Then There’s ‘A Town Called Alice’

Once again we’re back in the middle of the trackless hot and dry area that makes up most of the middle of the Australian continent. The first to successfully settle and populate this area could not have done so without the camels and, if you doubt that, book a trip on the Ghan and spend some time studying the passing landscapes. 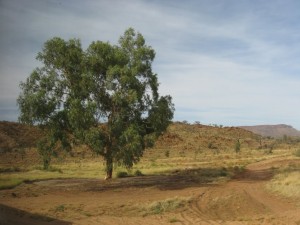 As far as I can tell, terrain is the principle difference between this area and the great Nullarbor Plain to the south. Here there are hills, and those off in the distance could even be mountains. And here, unlike the Nullarbor, there is, we are told, an actual wet season when rains can be prolonged and heavy. 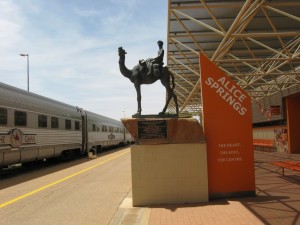 The Ghan reaches Alice Springs shortly after 9:00 a.m. and passengers file off the train and onto an assortment of buses and vans ready to shuttle them into the main part of town or to one of the optional tours being offered. Today, my choice is to be on my own, to wander around “the Capital of the Outback” and just let impressions happen as they will. 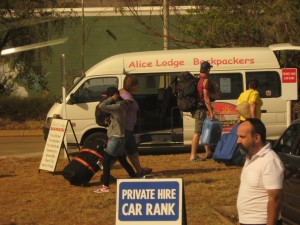 There are a lot of “backpackers” riding in Red Class on this train and this is where a lot of them are getting off. The term is pretty much applied to anyone under 30, wearing T-shirts and jeans, and traveling on the cheap … and there is an entire segment of the tourist industry in this country specifically geared to serving these intrepid folks. 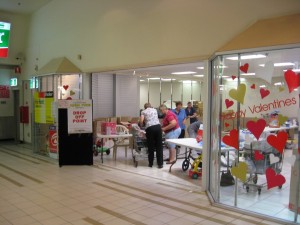 Stepping off the shuttle bus in the center of town, I feel right at home because at first blush Alice Springs looks a lot like a small town in any hot part of the U.S. with buildings that are right out of the 60s. Just over there is the local K-Mart. And the air conditioned indoor mall, here, has a huge Woolworth’s as the anchor store. (The photo above is of a shop where clothing and other essentials were being collected to aid victims of the terrible bush fires in Victoria, far to the south.)
But there are also a large number of aborigines here, too … all chatting in one of their own tribal languages, of which there are a great many. One, a “stockman” or cowboy, cuts a very impressive figure. He’s wearing a western hat, long sleeved shirt with a dark blue bandana at his throat, and slim jeans that are cut just so over his western boots. Others, in fact most of the others, are dressed more shabbily, but are moving about their business through the mall, stopping for an ice cream cone or peering into shop windows. 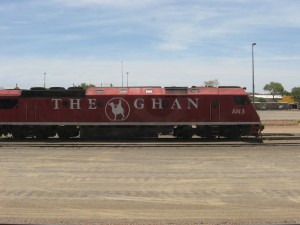 I’m back aboard the shuttle bus at noon and back at the train station 10 minutes later, relaxing with a cold drink in the Ghan’s lounge car and swapping stories with other passengers about our morning excursions. The aborigines are mentioned and one man – mid-50s, shaved head and a blunt spoken Aussie businessman on holiday – says, “Most of us aren’t very proud over how the indigenous people have been treated in this country.” After a brief silence, the subject is changed. 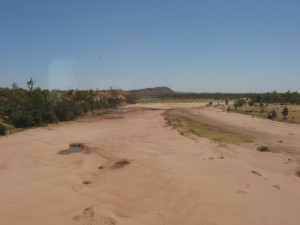 Underway again and, sometime that afternoon several announcements are made that we are approaching the Finke River, described as one of the oldest rivers on the planet and which we will be crossing on a bridge that is 450 meters (1500 feet) long. And – ta-dah! – here it is. It’s wide, all right, but bone dry except for a few spots where water can still be seen in low spots. (Britannica describes it as “a major and intermittent river.”) Once again I’m struck by the one consistent impression I’ve had while crisscrossing this continent: how hot and dry it is so much of the time.
Tomorrow: Adelaide, and good things coming to an end.