Just after lunch, and a bit over 200 miles south of Darwin, the Ghan eases to a stop in the town of Katherine, a soggy or dusty (depending on the season) town of some 7,000 people. By now the weather has cleared and I head off down the platform to a van waiting to take us on a two hour tour of the town. 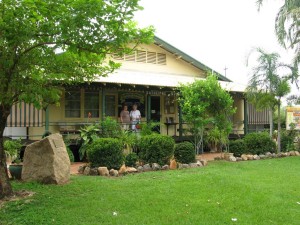 First stop is at the town’s charming museum, several rooms of interesting artifacts and mounted newspaper clippings. One of the earliest of the “Flying Doctor” services was located here, with pilot/physicians responding to emergency calls from remote ranches and farms hundreds of miles away in the outback. There is an extensive display and one of the first planes used carefully stored in a nearby ‘hanger’. 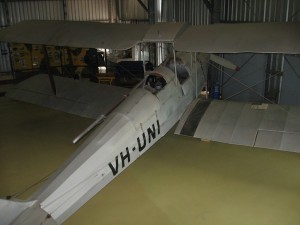 One of the first to fly out of Katherine was Dr. Clyde Fenton, whose skills as a physician were balanced by his daring as a pilot. In the first several years of his “practice”, Fenton racked up some 75 minor events, referred to officially as “mishaps”, with his plane, a 1934 deHaviland Gypsy Moth. The authorities found that ever-increasing total a bit embarrassing, but Fenton insisted on taking chances in order to reach his far-flung patients. Eventually, a Solomon-like solution was reached: they stopped counting. Dr. Fenton survived , flew with the RAF during World War 2, and died in 1982. The local school here was named in his honor. 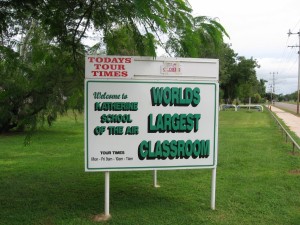 And speaking of schools, Katherine is also the site of a unique school where the 17 teachers conduct classes for 208 students scattered over 800,000 square kilometers … Australian kids who live in remote areas or are with parents working a foreign countries throughout Asia. Teachers and students are linked by computers and monitors and satellites. One more example of how the Australians have coped with their unique circumstances. 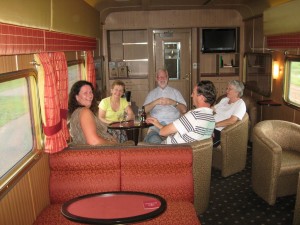 Back on board the Ghan and rolling south again, there is just time for a few libations to sooth parched throats – touring is a strenuous business – followed by a quick shower in the small lavatory that opens off my compartment. 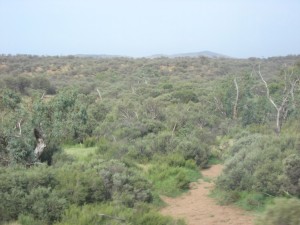 Meanwhile, we’ve clearly left the wet, tropical climate of Darwin and are now traveling through an area that boats some actual hills. It’s still green out there, but much dryer and not nearly as lush as the country just a few hours behind us. You’ve got to pay attention, because the Ghan’s Australia is constantly changing. 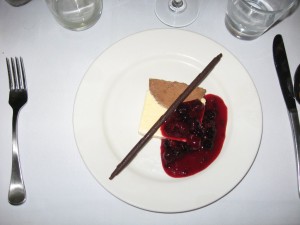 I know, I know … this is really cruel, but I do need to offer a few words of praise for the food that is presented to us thrice daily. My choices tonight were a zucchini, leek and blue cheese soup and a prime beef filet with caramelized onions and baby carrots. This was the dessert: a rhubarb and ginger ice cream torte, topped by raspberries in a rosella flower syrup. The stick-like thingy is chocolate. Life is good.
Tomorrow: A Town Called Alice.