What Are the Odds??

Amtrak’s City of New Orleans runs daily in each direction between Chicago and New Orleans.

Yesterday, the train hit a car at a grade crossing in McComb, Mississippi. The 19-year-old driver of the car tried to cross the tracks in spite of flashing warning lights and clanging bells. In another case of dumb luck, the kid was taken to a hospital, but was apparently not seriously injured. After a 40-minute delay in McComb, the City of New Orleans resumed its southbound journey.

Less than an hour later, in Independence, Louisiana, it happened again! The same train hit a car at another grade crossing, this time killing the two occupants. It tore the car in half and shoved the pieces almost 100 yards down the track before coming to a stop. None of the passengers or crew was hurt. 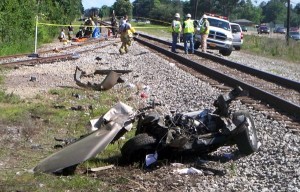 There are no flashing lights or gates at this particular crossing, but there are warning signs and witnesses reported hearing the train’s whistle before the collision. (Engineers sound the horn at every grade crossing, whether or not there are gates.)

As I have noted in a couple of earlier posts, these accidents are doubly tragic. First, of course, because people are killed or injured, but also because of the psychological toll on the engineers.

The industry is doing its best to inform and educate people about grade crossing safety through a program called Operation Lifesaver. It has helped, too, because there’s been a steady reduction in the number of these accidents over the years. I guess that means the message is getting through to people who are unaware or who might otherwise be careless.

It would appear, however, that little can be done for those suffering from chronic stupidity.

Previous Are We On the Verge of a Comeback for Trains?
NextA Memorable Visit to La Belle France