The Climate, It Is a-Changin’.

When I first arrived here in the early 60s, I really do remember the weather being almost monotonously beautiful almost all of the time. In fact, 50 years ago, the local TV news programs rarely included weather reports. There was no need. The guy delivering the news gave the forecast and It was almost always the same:

“Sunny with some scattered clouds, winds out of the northeast 10 to 15 miles per hour, possible brief showers in the late afternoon, high temperature in the mid-80s.”

That’s the image mainland people have of Hawaii and it’s still fairly accurate much of time: sunshine and balmy temperatures thanks to the almost constant trade winds coming out of the northeast. But that’s at sea level. 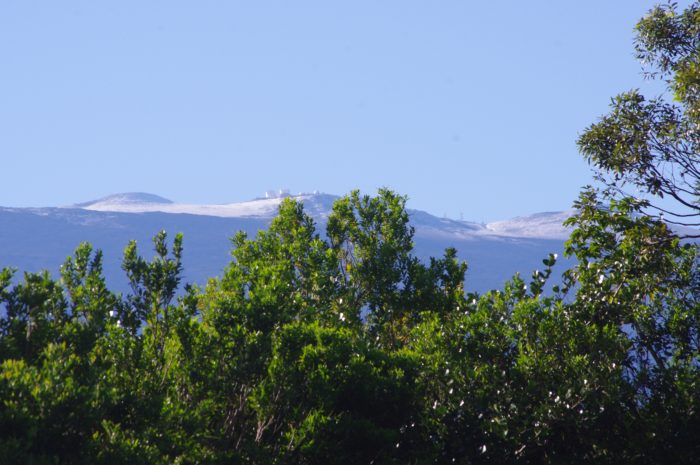 We woke up yesterday morning to find snow had dusted Haleakala, the 10,000 foot dormant volcano that dominates East Maui. There was time enough after breakfast—yesterday being a holiday—for my daughter and granddaughter to drive up to the rim of the crater and pelt each other with snowballs. I would guess the temperature was in the low forties by the time they reached the top and no doubt the snow was gone by noon.

But our climate is changing, make no mistake. On Oahu, the sand has been replenished along Waikiki beach three or four times that I can think of. And several of the hotels in that area have lost almost all their beaches. Residents with beachfront property on every island have seen their front yards shrink and that’s painful when residential property is bought and sold by the square foot.

It does seem as though we’re getting heavier rains more often, which, of course, accounts for the frequent flash flood warnings on our cel phones. (Yes, yes, I know … along with the this-is-no-drill missile attacks.)

Previous Hockey: Not for the Faint of Heart.
NextConfusing If Not Deceptive Practice.