In Washington, the Trump Administration has pretty much adopted the budget recommendations of the Heritage Foundation, one of the libertarian “think tanks” supported by the Koch brothers. As far as Amtrak is concerned, that means no federal dollars for the national network. 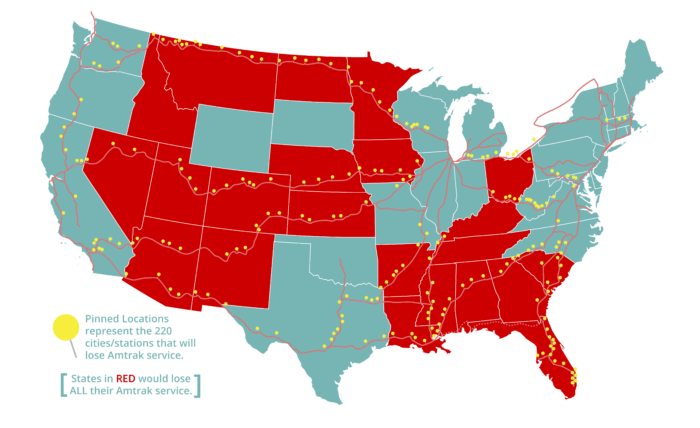 The probable result, while perhaps not immediate, would be the loss of almost all the long-haul trains in the West . . .

One possible exception would the the Coast Starlight—assuming, of course, that California, Oregon and Washington would agree to subsidize that train. Since all three of those states have an enlightened attitude with regard to public transportation, I’m guessing that option would at least get serious consideration in the respective legislative bodies.

In terms of the long-distance trains running in the eastern part of the country, the loss of federal subsidies—as pitifully small as they are—would probably mean the end of . . .

With little but gut feeling to support me, there are two overnight trains that could possibly survive . . .

And, finally, it would seem almost a certainty that the Auto Train would survive since I’ve been told on numerous occasions that it has always been very profitable.

There are several ironies attached to this potential disaster. First, a number of the 220 cities and towns that would lose their Amtrak service have spent a lot of taxpayer funds renovating and restoring their railroad stations. Won’t they be pleased! Second, outgoing Amtrak CEO Wick Moorman has stated publicly that eliminating the long-distance trains would not save money. To the contrary, he said it would ADD something like $440 million to Amtrak’s annual deficit.

That’s probably OK with the Cato and Heritage libertarian ideologues. What really matters to them is that the federal government would no longer be subsidizing passenger trains. They’ll feel good about that.

Previous A Good-Deed-Doer Gets Yelled At.
NextCalifornia Ranks Number One.