Trump Voters Get a Poke in the Eye.

When it comes to the serious problems we’re all facing—including one or two that are potentially catastrophic—the people now in positions of authority seem to have already forgotten who brung ‘em to the dance. 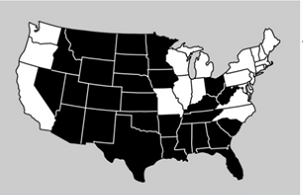 The Trump administration has submitted a budget to Congress that would zero out Amtrak’s subsidy and effectively end long-distance train service to most states in the west and mid-west. As a practical matter, that would mean somewhere between a third and a half the country’s population—people living on those black states—would no longer have reasonable access to affordable public transportation. Everywhere else in the country, the Trump budget also takes the axe to transit and commuter rail as well.

In the face of such regressive thinking—it is, in fact, a political ideology—we can only try to remind the powers-that-be how Quality of Life for ordinary folks is invariably enhanced by decent public transportation in all its forms.

When people have the choice, most choose public transportation, especially transit. They do so because it means many can get along without a car. That means no downpayment, no monthly payments, no car insurance, no gas, no repairs and no parking fees at work or at home or both. Almost everyone else is better off, too, because when public transportation connects communities, the workforce gains mobility, which means more workers can get to more jobs.

In recent years, VIA Rail in Canada has been going through the same kind of squeeze that our Congress has applied to Amtrak. Forced to cut costs, VIA has reduced frequencies between Toronto and other major eastern cities, primarily Ottawa and Montreal. The result has been the moving of some four million trips per year from VIA trains to highways. The impact of all that can be quantified: more congestion on the highways, more accidents, more injuries, more deaths, more loss of productivity, more tons of CO2 pumped into the atmosphere. All of that negative stuff has been caused by eliminating just a few trains a day between just two or three major cities.

And the budget presented to Congress by our new run-government-like-a-business  administration eliminates all federal funding for transit systems, commuter trains and Amtrak’s passenger trains now serving all those black states . . . and almost all of them went for Trump in the November election.

Previous The Hoosier State: Another View.
NextHow Best To Run the Government. (Hint: NOT Like a Business.)