My personal worst-case Amtrak scenario is that they will conspire to get rid of the Pacific Parlour Cars on the Coast Starlight and justify it by claiming the cars are just too old and too expensive to maintain. With all the cost cutting going on, I just know that the guys with the green eyeshades would axe the parlor cars in a heartbeat if they thought they could contain the uproar that would surely follow. 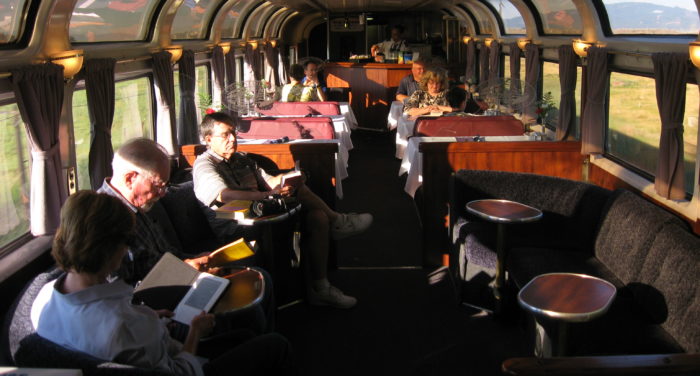 For those who have never had the pleasure of riding in one of these beauties, they date all the way back to the mid-1950s when they were built for the Santa Fe to be used on the El Capitan, the all-coach train that ran between Los Angeles and Chicago. Amtrak’s now-retired executive, Brian Rosenwald, rescued five parlor cars from where they had been abandoned in a rail yard.

To give these cars a dollop more panache, Rosenwald changed the spelling from “parlor” to “parlour”. My SpellCheck is unimpressed, however, and goes into bonkers whenever I write about them and add the extra vowel. My solution has been to skip the “u” and use a lower case “p” as much as possible.

Riding from Davis to Los Angeles in the parlor car last week, I was distressed when the attendant told me that beginning in early January, the Coast Starlight would only be carrying a parlor car one day a week. Of course I had dark suspicions that the powers-that-be at Amtrak were really plotting to phase out these wonderful old cars permanently.

I relayed what I’d heard to NARP’s Washington office and our President and CEO, Jim Mathews, went right to the source at Amtrak. Back came the official response:

Beginning January 6, 2017 through mid-March 2017 (exact date to be determined), a time of lower ridership, the Pacific Parlour Car equipment operated on the Coast Starlight, trains 11/14, will be cycled through the shops for heavy maintenance. … During this time the Pacific Parlour Cars will not be on the train, except for train 14 departing Los Angeles on Fridays, and train 11 departing Seattle on Sundays. There will be no substitute car on other days.

And there we have it. Let’s all hope it’s the straight scoop. I’ve already flagged March 15th on my calendar and will follow up on that date.