Every business looks for a marketing hook . . . something that sets it apart from the competition and will have a unique appeal to potential customers.

I had heard good things about Virgin America: a fresh approach … on board crews that were young and genuinely friendly … new and unique in flight amenities.

After my first two flights on Virgin America, I can report … yeah, the experience was sorta different. 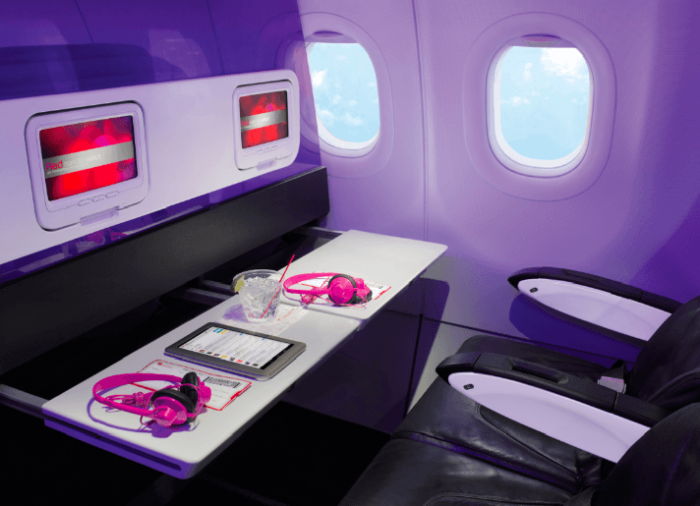 Both flights–a red-eye from Maui to San Francisco and San Francisco to Chicago–were fine. Left on time and arrived on time. Both flights were full and both featured narrow seats with inadequate legroom. (The photo is misleading.)

In due course–this was on the San Francisco-Chicago flight–the inevitable cart came ’round and, since I had had a quick bite in the San Francisco airport, I asked the flight attendant for a bag of chips and a white wine. She replied–a bit impatiently, I thought–that I would first have to “place an order” for those items. Then she said she would be back and proceeded down the aisle.

I had absolutely no idea what she was talking about. Happily, the man in the adjacent seat knew the Virgin drill and said I had to use the screen in front of me to, yes, order my snacks. And so, fumbling my way through an unfamiliar sequence of screens, I finally found and tapped on the icons for chips and a bottle of chardonnay.

About 20 minutes later, the flight attendant came back up the aisle, stopped at my row, and handed me a bag of chips and a small bottle of wine. I had paid an additional $30 for the seat, so there was no charge.

In fairness, the first leg was a red-eye and, since I hadn’t slept, I was groggy and dozed for brief periods on the San Francisco-to-Chicago flight. No doubt there were some really swell amenities available of which I was unaware. I’m taking Virgin America back home on Friday and will devote whatever time might be necessary to finding and exploiting them. (Now if there were only just a little more leg room.)

Previous A Red-Eye to the Mainland.
NextIs the Chief Coming to Pueblo?