George Will Strikes Out Re: Amtrak.

There was a time when George Will wrote columns that were entertaining and made sense. Of course, those were the ones about baseball, a subject of which he has considerable knowledge. After a Will column that appeared a week ago, cleverly called “Off the Rails at Amtrak”, it’s quite clear that George Will knows next to nothing about either Amtrak or passenger rail in general. 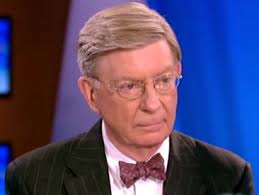 His argument, boiled down to its essence, is this: Amtrak loses money, therefore, Amtrak is a failure and should be shut down. A spot-on analysis and rebuttal to the column by J. Howard Harding, long-time NARP member, immediately identified the fundamental problem Will has with Amtrak. Harding describes the Will screed as “yet another recitation of his ideological disdain for Amtrak, unsupported by careful factual analysis, thus demonstrating once more that  ‘Great ignorance induces great certainty.’ ”

Frankly, by suggesting that George Will is ignorant of the facts, I think Harding gives Will more credit than he deserves.

Will labels Amtrak a failure based on the fact that, when Congress created Amtrak back in 1970, they decreed that this new national passenger rail system should operate at a profit. Wouldn’t it be nice if that’s all it took! Congress simply passes a law and repeals the Law of Gravity. The fact is—and this evidently escaped Will’s notice—there is no national passenger rail system in the world that operates at a profit. Not one.

That’s because, by definition, a national network of passenger trains serves an entire country, including smaller cities and towns without the concentrated population to provide the volume of ridership necessary for the system as a whole to break even or make a profit. A national system like Amtrak is public transportation . . . and public transportation does not … cannot … and will never operate at a profit.

Still—through ignorance or simply because it runs counter to their chosen ideology—conservatives like George Will label Amtrak a failure when, in fact, they ought to be praising the system because it operates so close to break-even. Howard Harding knows that’s true. Quoting him again: “Amtrak operating revenues currently cover about 91 percent of its operating costs. No other urban or national intercity rail passenger service here or elsewhere on this planet does as well.”

Do you think that simple truth could have escaped the notice of George Will? Neither do I.

Previous Did They Find a Need and Fill It?
NextNARP Radio Touts a Daily Cardinal.