Where There’s A Will There’s a Wait.

There used to be a daily train from Washington to Montreal—the original one, the Montrealer, was operated by the Boston and Maine Railroad and then by Amtrak beginning in 1972. 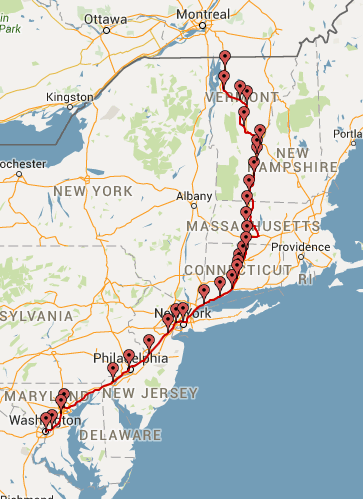 The Montrealer was a popular train, especially in winter months with skiers traveling north in search of powder. In fact, there was even a lounge car on the train, complete with a piano bar. Then, about 20 years ago, Amtrak launched The Vermonter, a train that also originates in Washington, but terminates in St. Albans, Vermont, a metropolis of some 7,000 people. (One of these days, I will try to discover why the powers-that-be didn’t extend the Vermonter all the way to Montreal. Surely they didn’t think St. Albans would be a more attractive destination!)

But now there’s talk of restoring Amtrak service to Montreal by simply extending the Vermonter’s route 65 miles farther north beyond St. Albans. Ah, but there are issues, including security, track conditions, and additional staffing for customs and immigration.

The idea has been favorably received by all concerned and Brian Searles, a consultant working on the project, says “the stars are aligned” and he thinks rail passenger service to Montreal can be restored within three years.

Good heavens! Once again I’m reminded of the management philosophy employed with such success by my former boss, Frank Fasi, who was elected to a four-year term as mayor of Honolulu in 1969, and re-elected four more times after that. Frank served a total of 22 years as the elected head of Hawaii’s capital city and is almost universally acknowledged as the best mayor in Honolulu’s history. His campaign slogan was “Fasi gets it done.” And indeed he did.

Frank explained the secret of his success to me one time. He said, “If your the executive head of a big bureaucracy, whether it’s government or a private corporation, you have to spend 10-percent of your time setting policy and 90-percent of your time whipping people across the ass to make it happen.”

Three years to extend the Vermonter’s route by 65 miles? Frank Fasi would have given the people in charge 18 months to make it happen . . . and then he would have badgered them to bring it all in a month ahead of schedule.

Previous What If We Tweak the High-Speed Rail Argument?
NextSkipping the On-Line Travel Agencies.