My Five Most Scenic Amtrak Trains.

The truth is, I enjoy almost any train ride. But if you’re passing through beautiful countryside, it’s a big bonus. Just about every Amtrak route has something special to offer in the way of scenery, but over the next week or so, I’ll write about the five routes I think offer some really outstanding scenery. One of them is the Cardinal and in 10 days I’ll be on that train en route to the NARP meetings in Washington. With any luck at all, I’ll be able to take and post some photos from that trip both here and on Facebook.

Anyway, in 5th place on my list of most scenic Amtrak trains is … [drum roll] … the Adirondack.

This train operates daily in both directions between New York City and Montreal and the schedule is just about perfect. It’s an eleven-hour ride and you’re in daylight pretty much all the way no matter which way you take it. What puts this train on my Top Five List is the experience you’ll have if you can time your ride when the Fall colors are at their peak, best guess being late September/early October. The foliage will get more spectacular the farther north you go but, that said, it’s a wonderful ride any time of the year.

Within minutes after leaving Penn Station, and for the better part of two hours, the northbound train runs along the eastern bank of the Hudson River, passing small towns and stately homes. On the opposite side of the river, you’ll be able to see the U.S. Military Academy at West Point.

After leaving Albany, you’ll pass through some really lovely rural areas, with small farms and lots of woodlands. If you’re into horse racing, time your visit for sometime between late July and Labor Day. But it’s a very picturesque area—it’s been a posh resort destination for something like 200 years—stop to see Saratoga Springs no matter what time of year.

About 90 minutes farther north is Ticonderoga, site of the famous fort of the same name. It’s built on a bluff with a commanding view of the Hudson River and was the site of a crucial American victory in the early stages of the American revolution.

Two stops and another 30 miles farther north, the Adirondack stops at Westport, New York, where you can connect with an Amtrak bus for a 45-minute ride to Lake placid, site of several Winter Olympics. From the middle of June to the end of September, the Adirondack will stop at Port Kent so you can connect with a ferry that will take you across magnificent Lake Champlain to Burlington, Vermont. 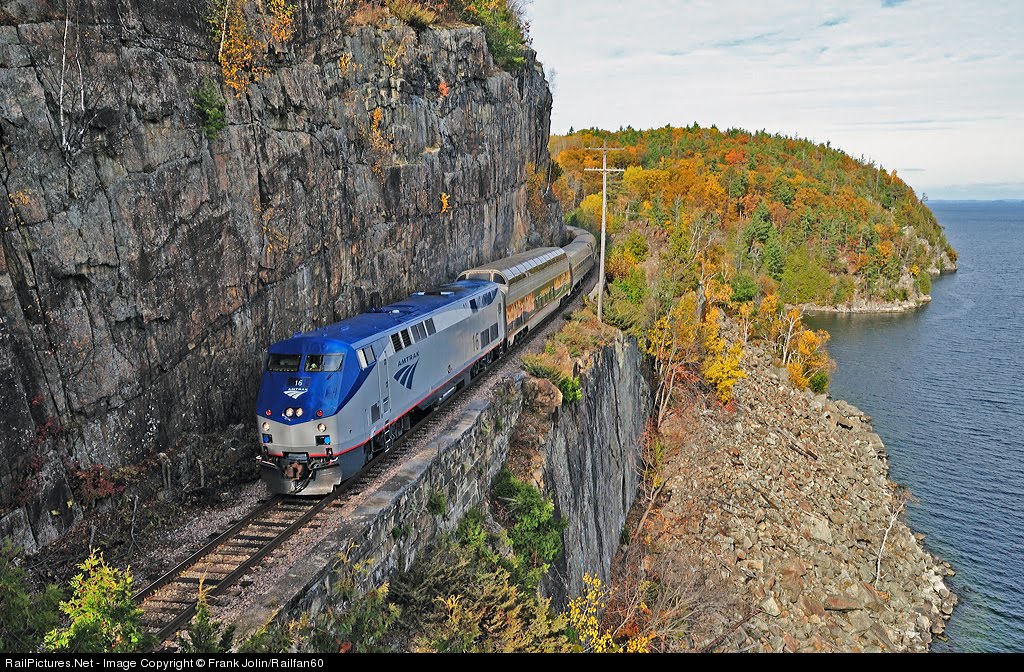 Or stay aboard, because from here it’s only 85 miles to Montreal, the second largest French-speaking city in the world. From the Great Hall of the Montreal railway station you can take an elevator up a couple of levels and—Voila!—you’re in the lobby of the Queen Elizabeth hotel. By now you probably know that I love classic old hotels and this is one of them. Furthermore it has a wonderful restaurant, so the plan is get off the train, check into your room, and have dinner in the hotel’s wonderful restaurant, Le Montréalais. Ah … life is good!