We have a houseguest here for a couple of days and that was her first question when the subject of train travel came up. (It always does … and sooner rather than later.) Short answer: Yes, absolutely. Train travel is a very safe mode of transportation.

When you spend any time around trains and the people who operate them, you realize very soon that there is a constant emphasis on safety. And with good reason. With massive weights often moving at high speeds, railroading is an inherently dangerous business. And that’s exactly why, on every railroad, whether freight or passenger, there is one prescribed way to do everything and that’s the way everyone does it. Or else!

Here are a few typical examples of safety procedures followed by most railroads, including Amtrak.

* When a blue flag (or light) is placed at the front and rear of a train it means that people are working under or around the train. The only person permitted to remove the flag is the one who put it there.

* When preparing to start a train moving, the engineer will (1) start the bell ringing to indicate locomotive is about to move, (2) blow the whistle to indicate direction of movement: two toots, forward; three toots, back.

* Radio messages from dispatcher to engineer are acknowledged and carefully repeated back to be certain that every detail of the message was understood.

* The assistant engineer in the locomotive calls out passing signals to be certain they have been seen and noted by the engineer, then one of the two will relay that information to the conductor by radio, and the conductor will acknowledge.

* When backing into a station, the train will come to a “safety stop” 50 to 100 feet from the bumper post, then continue backing slowly before coming to a final stop. 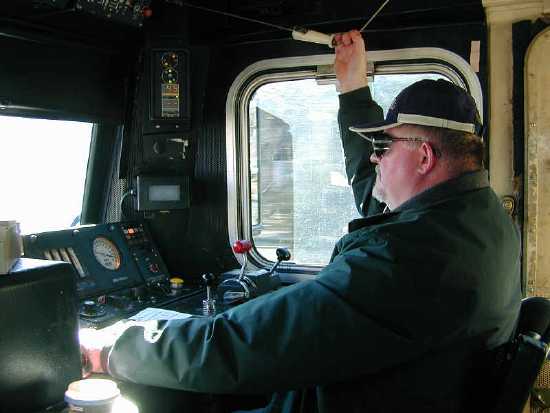 There are several different safety devices, too. Electronic detectors located beside the tracks which broadcast warnings to the train crew if it senses overheated journal bearings (called hot boxes) or any kind of dragging gear.

In every locomotive cab there’s something called an alerter, which is designed to make sure the engineer hasn’t become ill and is always in command of the train. If the engineer doesn’t change the throttle position, touch the brakes or blow the whistle for a period of 20-25 seconds, a strobe light will begin to flash in the cab and a loud horn will sound. At that point the engineer has just a few seconds to perform one of those tasks or press a large button (lower right in photo above). If he doesn’t, the brakes will be applied automatically and the train will come to a stop.

Previous You Gotta ASK If You Gonna Get!
NextMy Five Most Scenic Amtrak Trains.