Does Travel Really Have To Be This Complicated?

Jim Loomis September 03, 2014 All Posts, Amtrak, Congress, Long-Distance Trains, National Association of Railroad Passengers, Rail Fares, Train Travel Advice 4 Comments
I suppose so. The airlines and Amtrak and the hotels are all doing their best to squeeze every last dollar of revenue out of us, albeit for different reasons. As a result, it’s very time consuming at best, and impossible at worst, to figure out the best way to get where you’re going for the lowest cost. Air fares from Maui to Chicago, for instance, range from $712 to more than $1400. Then, just when you stumble across an unbelievably cheap air fare and are about to book it, you remember to click on “details” and discover there are three stops and it’s going to take you 26 hours to get there!
I’ve begun organizing my trip next April for our annual NARP meeting in Washington, DC, and the options are mind-numbing.

I’ll be departing from Maui, of course, and will fly direct to any one of several cities on the West Coast where I’ll continue on Amtrak all the way to Washington. There are quite a few options. I can take the Southwest Chief or the California Zephyr or the Empire Builder to Chicago and the Capitol Limited to Washington from there. Fares for a roomette all the way are reasonably consistent, ranging from $717 to $784. Or I can catch the Sunset Limited in L.A. and connect with the Crescent in New Orleans. The cost for that is a couple of hundred dollars more, but that’s understandable because it’s a longer trip and more hours mean more meals have to be included in the fare.

But, while planning my route on the way back from Washington to the West Coast, I stumbled on a weird one.
I’ve never been to San Antonio and the Alamo, so I thought it would be interesting to stop off there on my way back to the West Coast. It actually works out quite well: I can take the Crescent from Washington to New Orleans, connecting there with the Sunset Limited to San Antonio. Then, depending on the day, either the Sunset or the Texas Eagle from there back to Los Angeles.
(Yes, it’s confusing. The Sunset Limited operates three days a week from New Orleans to San Antonio, where it links up with the Texas Eagle for the rest of the trip to L.A. The Eagle runs from Chicago to Los Angeles by way of San Antonio and it operates every day.) 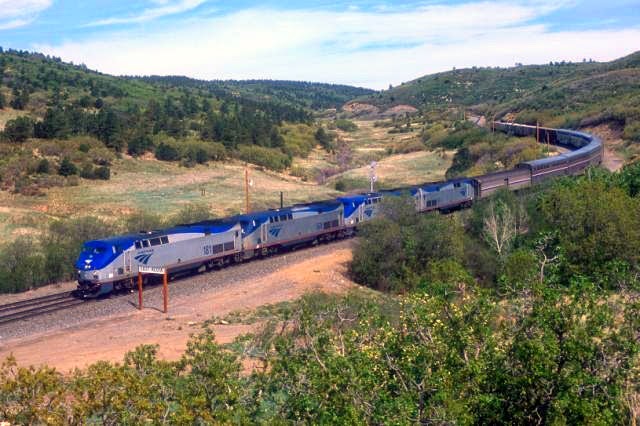 But here’s the weird pricing I discovered:
Departing from San Antonio for Los Angeles on April 27th, the cost of a roomette on the Texas Eagle is $849.
But if I book a roomette on the Sunset Limited for the very next day, April 28th, the roomette costs just $397.
Gee .. delay my return by one day and save 50-percent!
But wait! As a matter of curiosity, I checked the Eagle for that same day, April 28th, and the roomette was $625!
So, on the 28th of April, the passenger riding in a roomette in one of the Eagle’s sleepers is paying almost 60-percent more than a passenger who’s sitting just as comfortably in an identical roomette a few cars away in a sleeper that’s technically part of the Sunset Limited.
That struck me as strange, even ass-backwards. Amtrak is coming under a great deal of pressure from some in Congress (see my previous post) because, according to Amtrak’s unique accounting system, the Sunset Limited is the biggest money-loser of all their long-distance trains. If people are paying $625 to travel from San Antonio to L.A. on the Texas Eagle, what’s the rationale for charging more than a third less than that to people who book the Sunset?
I really don’t get it and I suppose that’s why, in more than 20 years of running my own business, I hired an accountant I trusted completely and did whatever he recommended. Still . . .

Previous Is the Congressman Misinformed or Misguided? Or Both?
NextYou’ll Never Know If You Can’t Go!