Jim Loomis January 15, 2014 Amtrak, Great Rail Journeys, Most Scenic Train Rides, Pacific Parlour Car 2 Comments
People are always asking me about which of the Amtrak trains I like best. And that’s hard, because there are different reasons for liking certain trains.  For instance, I think the California Zephyr’s route is the most scenic. The Adirondack is the train for Fall colors. And if you’re into hot, flat and dry landscapes, take the Sunset Limited across West Texas.
But I’m partial to the Coast Starlight and for the shallowest of reasons:  I love the Pacific Parlour Cars that are part of that train’s consist … and it’s the only train Amtrak runs with that wonderful amenity.

On several occasions, when traveling from Chicago to Los Angeles where I catch a flight back home to Maui, I’ve passed up a direct CHI-LAX routing on the Southwest Chief and opted to take the California Zephyr. I hop off at Davis, California, in the late afternoon and head for a nice hotel with a very good restaurant that’s right across the street from the station. I spend the evening there and catch the southbound Coast Starlight when it reaches Davis just before 7:00 the next morning.

Ahhh … I board the train, drop my bag in the roomette, and head straight for the Parlour Car, where I order a Bloody Mary, and sink into one of the overstuffed easy chairs. For the next half hour or so, I watch California roll by and contemplate the breakfast I’ll be having in the dining car about the time we roll into Emeryville. 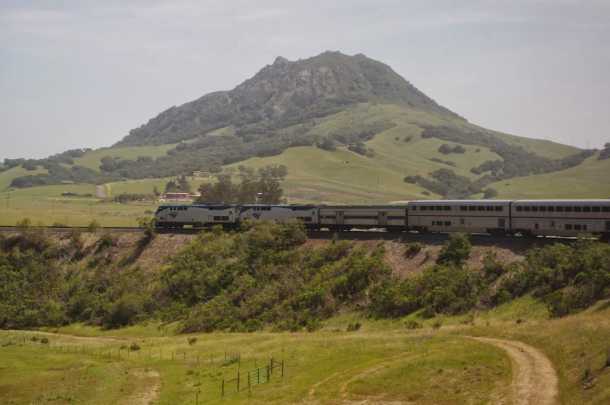 The rest of the day is mostly relaxing in the Parlour Car – watching the passing scenery, having lunch, chatting with other passengers, head to the rear of the train for yet another photo of the horseshoe curve outside of San Luis Obispo, enjoying a wine and cheese tasting, having a steak dinner (with a half bottle of merlot), and relaxing in the roomette until we get to L.A.

A couple of months ago, I was describing the Coast Starlight experience to a friend here on Maui. “How long is the ride from Davis down to L.A.”, he asked.  I told him the train gets to Los Angeles at 9:00 p.m. “But that’s 14 hours,” he said. “And you can fly it in less than 90 minutes!”

Poor guy. He just doesn’t get it.

Previous Why Are We Still Arguing About High-Speed Rail?
NextStranded in Tahiti!