When Mother Nature Starts Flexing Her Muscles, Watch Out!

Jim Loomis September 18, 2013 Amtrak 1 Comment
When I was a teenager living in a rural part of Connecticut, there was a huge rainstorm that lasted for several days. The result was some serious flooding that caused a lot of damage. We lived in a hilly part of the state and the water, rushing downhill, uprooted trees, washed out roads and flooded out a great many homes.
My parents had a friend who lived just a hundred feet or so from the Farmington River, a placid stream that meanders through the area, eventually flowing into the Connecticut River 20 or 30 miles away. The night of the big storm, he walked around the place before he went to bed and found everything to be all right. Four hours later, he and his wife had to evacuate the place by climbing into a rowboat from their second floor bedroom window.
Here’s another example of the kind of damage runoff from heavy rains can cause. 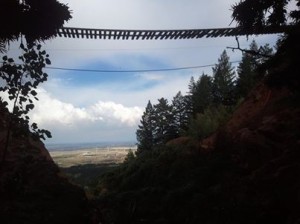 Hard to imagine, isn’t it, that water running down a stream bed could take out so much earth and leave just the track hanging in mid-air. This mess is near Plainview, Colorado, which is about a dozen miles south of Boulder. 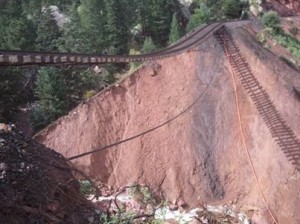 Amtrak’s California Zephyr has been affected, of course. Passengers are now being bussed between Denver and Grand Junction. That’s really a pity because that stretch is probably the most scenic part of the entire route.
No word yet as to how long before the Zephyr will be able to resume its regular route.