I’m off next Monday for almost three weeks in Europe, followed by a meeting of the National Association of Railroad Passengers in Jacksonville, and concluding with another journey on two of my favorite Amtrak rides: the Empire Builder from Chicago to Seattle, and the Coast Starlight from Seattle down to Los Angeles. I’ll fly back to Maui from there.

When I still have a few days before beginning an extended trip, I start to concentrate on what I have to bring. Not shirts and socks, but little things that will be really missed if and when the need occurs: Q-tips, for example. A spare lens cap for my camera. An extra pair of reading glasses. One of my not-so-finer moments came when I had to ask a hotel desk clerk for a couple of paper clips to stand in for forgotten cuff links. (It brought to mind Zero Mostel’s great line from The Producers: “I’m wearing a cardboard belt!”) 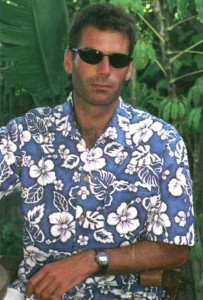 That reminds me: for my first NARP meeting, it never occurred to me to pack a sports jacket and a dress shirt. Here in Hawaii, after all, “business attire” means your aloha shirt is tucked in. For casual events, on the other hand, the shirt is worn out.  Obviously a tucked-in aloha shirt wouldn’t cut it for NARP’s annual Day on the Hill, when we all split up and visit members of Congress to plead the case for passenger rail. Fortunately, I was scheduled to meet with members of the Hawaii delegation, so my colorful aloha shirt underneath a borrowed sport coat wasn’t even noticed.

Mainland weather can be another problem for us.  After all, when the mid-afternoon temperature here is 82 degrees in July and 76 degrees in January, it’s easy to forget that it’s probably going to be 40 and windy when you get off the plane in Chicago. That’s what Hawaii folks call “freeze-ass cold”.

Many of us simply don’t own warm clothing suitable for a Chicago winter. It’s not unusual for people here, when confronted with the necessity of cold-weather travel, to start calling friends who are close to their size and may own a warm coat. Years ago, Bob Kraus, a columnist for the Honolulu Advertiser, wrote a very funny column about an old overcoat … and where it had been and who was wearing it at the time.  Krauss said the owner estimated that the often-borrowed coat had traveled more than a million miles.

So, five or six days before a trip, I have a very serious sit-down with myself … my last chance to really think about all the little oddball items I have to take with me. I’ve scheduled that session for tomorrow morning. I already know that something will be overlooked. If I’m lucky, I’ll never know what it was. But more than likely, when I least expect it …

I’ll let you know here what it turns out to be.