An Extended Foreign Trip is NOT a Do-It-Yourself Project.

Jim Loomis August 04, 2013 Amtrak, Europe, Mongolia, Train Travel Advice 2 Comments
If I’m traveling in North America, I usually handle all the reservations myself. But in the case of an extended European trip, I feel much more comfortable using a booking agency like Railbookers, a London-based company with an office in Los Angeles.
I was referred to Railbookers by Mark Smith, the person behind what has to be the internet’s best and most complete web site devoted to rail travel. It’s called The Man in Seat Sixty-One, which Mark says is his is preferred seat on the Eurostar from London to Paris.
The London office of Railbookers handled all the details of my 2011 trip: London-Berlin-St. Petersburg-Moscow-Mongolia-Beijing-Shanghai … all by train.  They did the ticketing for a dozen different trains and made recommendations for all the hotels and then booked them once I approved.  The same person who did the bookings for me came to my hotel in London with a packet containing all my rail tickets and vouchers for all the hotels. We sat in the hotel lounge and had a couple of beers while he walked me through the whole thing. How’s that for service! 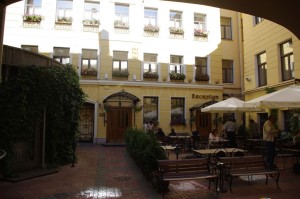 Want an example of the details Railbookers covered? They recommended the Hotel Helvetia in St. Petersburg because it was small, attractive, comfortable, and reasonably priced. (They were right; see photo above.) They also recommended the Helvetia because it’s an easy walk from main railway station … for which they gave me clear and specific directions.
The also provided a list of all the visas and transit visas I would require. A screw-up with any of that and … Well, let’s just say that, based on my limited, routine, but unpleasant contact with the Belarus border officials, having your transit-visa in order when departing that former Soviet-bloc country should be an extremely high priority.
Railbookers also arranged for someone to meet me on arrival in both Moscow and Beijing and then drive me to my hotel. Let me tell you: If you’re surrounded by a swirling crush of people in a huge railway station, and all the signage is in the Cyrillic alphabet or Chinese characters, you will welcome the sight of a smiling man holding a sign with your name on it as you step off the train.

Seven weeks from today, I’ll be off on an extended trip to Europe. I’ll be away from home for 30 nights, will be on 29 different trains (three for overnight) and I’ll stay in 17 different hotels. To me, it just makes sense having a real pro like Matthew Foy of Railbookers take care of all those details. And, yes, he and I are having a couple of beers on my second night in London when I get all my tickets and hotel vouchers.

Previous Google Is Out To Get Me. No … Really. I’m Serious.
NextLetter Writer Defends Subsidy for Roanoke Amtrak Service.