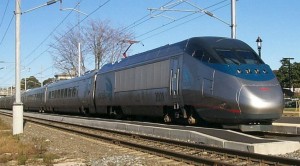 Acela is what Amtrak calls their high-speed train that runs multiple times a day along what is known as the Northeast Corridor — Washington-New York-Boston. The Acela trainsets look pretty much like the French TGV (short for Train à Grande Vitesse, literally “high speed train”.) They’re modern and sleek and just look fast! But there are some differences — some apparent, others not.

High-speed trains elsewhere in the world typically run at around 300 kilometers an hour, some quite a bit faster than that. For those of us who don’t speak metric very well, 300 kph translates to 187 miles-an-hour. The Acelas don’t go that fast. The units themselves are capable of reaching that speed, but the track conditions — the “infrastructure” — can’t handle it. So the Acelas average something like 88 mph and run at 110-120 mph for much of the way, in fact hitting 150 mph for a couple of brief stretches. 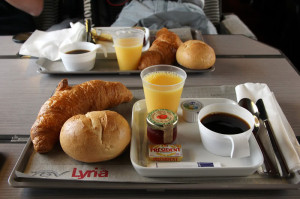 The TGV and most of the other high-speed trains operating elsewhere in the world offer passengers what I still find to be an amazingly smooth ride. While zooming across the French countryside, car attendants on a French TGV or one of the Eurostars are calmly rolling food service carts up the aisles, serving meals and pouring hot coffee into delicate china cups.
Acela’s ride is not that smooth and, in fact, it’s a bit on the rough side here and there. For the first few miles out of Washington, I had to hold my glass of white wine in the air for fear the wine would splash out of the glass if left sitting on the tray table. It’s that pesky infrastructure! Let me hasten to add that it’s a “rough ride” only in comparison to the TGV or the Eurostar, and certainly no more uncomfortable than traveling in an Amtrak Superliner elsewhere in the country.
These Acela train sets are also a lot heavier than their European counterparts. That’s because the FRA, the Federal Railroad Administration, insisted that they be built to much higher standards in terms of being crash-worthy. As a result, the heavier Acela cars caused problems from the get-go. For one thing, the braking system had to be redesigned in order to effectively stop the much-heavier cars.
Other countries — France and Japan at the forefront — have taken a different approach: their trains are lighter in weight, but they don’t crash. Incidents, let alone serious accidents, are extremely rare. In fact, in the 50-plus-year history of the Japanese shinkansen, there has never been a fatality. Not one.)
All that said, it would be helpful if all the high-speed rail nay-sayers would ride the Acela. Better yet, of course, they should visit France or Spain or Germany or Japan and see first-hand how a high-speed rail system can serve the transportation needs of entire nations. It’s very frustrating. The rest of the industrialized nations in the world have had it figured out for decades. And the U.S. is Tail-End Charlie!
Anyway, it was a nice ride up here to Boston. I splurged on a first class ticket and actually had two complimentary meals en route, each of which was accompanied by a nice, also-complimentary glass of wine, plus refills: white with lunch out of Washington and red with dinner out of New York.
And how’s this for a bonus: legendary Red Sox pitcher Pedro Martinez was in my car from Washington to New York. Now that was a heady experience … unless, possibly, it was that second refill of the chardonnay.

Previous Lots of Talk – Amtrak and VIA Rail and Trains and Train Travel
NextAnnual Visit to Fenway Park is a Roll of the Dice, Weather-wise.