OK … So Which is Better: the California Zephyr or the Coast Starlight?

Jim Loomis March 20, 2013 Amtrak, Great Rail Journeys, Long-Distance Trains, Lounge Cars, Overnight Trains, Pacific Parlour Car, Train Travel Advice 0 Comment
That’s a tough one, all right. I had the chance to experience both trains a few days ago, one after the other, coming home from my recent trip to the National Association of Railroad Passengers board meeting in Buffalo, NewYork.
For scenery, I guess I’d give the nod to the California Zephyr (runs daily between Chicago and the Bay Area) and go with the Coast Starlight (daily between LA and Seattle) for on board pleasures. It’s a close call … 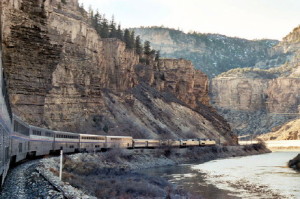 … but how can you beat the breathtaking views as the Zephyr climbs up into the Rocky Mountains after leaving Denver? Then, after the train emerges from the six-mile-long Moffat Tunnel, there’s the five-hour run along the Colorado River to Glenwood Springs, as seen in this great photo by Henry Kisor.
And there’s more – a lot more – the next day when the train departs from Truckee, California, and crosses the Sierra Nevada range by way of Donner Pass.
On the other hand, the scenery passing by outdside your window on the Coast Starlight is pretty special, too. North of Los Angeles, the train runs for mile after mile along the Pacific Ocean. (We saw wales spounting out there when I was on the train two days ago!) Farther north, there’s snow-capped Mount Shasta and then comes the several-hour run through the wilderness of the Cascade Range north of Klamath Falls in Oregon. 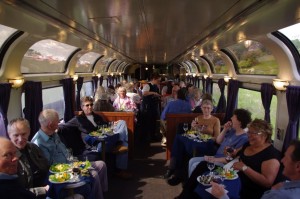 But the Coast Starlight offers sleeping car passengers a wonderful something extra: the Pacific Parlour Car! Ah … Imagine gazing out at that scenery from an overstuffed, swiveling armchair while sipping on a Bloody Mary prepared on order by the Parlour Car’s attendant! (The cool dude in the shades enjoying the afternoon wine tasting is my brother-in-law, Peter.)

I guess – if I absolutely must choose between the two trains – I’ll vote for the Coast Starlight as my personal Number One. It’s a tough call … but that Boody Mary tips the scales.

Previous You Couldn’t Make This Stuff Up!
NextA Few Tricks of the (Train Travel) Trade