Day One: Amtrak Cascades from Seattle to Portland

I flew into Seattle last night — on Hawaiian Airlines, of course — had breakfast with an old friend this morning, then caught Amtrak train # 513 to Portland.

Seattle and Portland are the main cities being served by Amtrak’s Cascades trains, but trains also run north to Vancouver, British Columbia, and as far south as Eugene, Oregon. 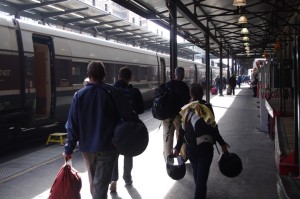 The equipment on these trains is quite different from anything Amtrak uses anywhere else in the country. It’s made by the Spanish company, Talgo, and I really can’t make up my mind if I like it.  It’s newer and of a modern design — quite attractive, actually — but there seems to be a lot more track noise and I don’t think the ride is quite as smooth … certainly when compared to Amtrak’s heavy bi-level Superliner cars. Still, there was nothing at all wrong with our trip to Portland today. I guess I just prefer the more traditional railcars.

Also, it seems to me that there is the perception among locals here that the Cascade trains are unpredictable and habitually run late … often verylate. I’ve heard that rap on Amtrak from several people. Yet my train today arrived in Portland just four minutes behind schedule and a quick check of an independent web site that provides a day-by-day history of on time performance for all Amtrak trains shows that — for the past month, anyway — the Cascade trains have averaged just eight minutes behind schedule.

At any rate, the Cascades service is extremely popular in this area and ridership has steadily increased every year.

Tomorrow afternoon I’ll board the Empire Builder for the two-night journet to Milwaukee where the NARP meeting begins Friday afternoon.

More to come as time and internet availability permit.