The Benson Hotel in Portland – An Oldie-But-Goodie.

Jim Loomis October 16, 2012 All Posts, Congress 1 Comment
I have a real soft spot for old hotels … as long as they have been kept up reasonably well, of course. The Waldorf Astoria in New York is close to the top of that list, but you don’t have to pay $500-$600 a night to enjoy the classic look and feel of an earlier and more genteel time. Others of this type I’ve visited include the Fort Gary Hotel in Winnipeg, the Congress Plaza in Chicago, and almost any of the Fairmont hotels, most especially the Banff Springs and the Chateau Frontenac in Quebec City. 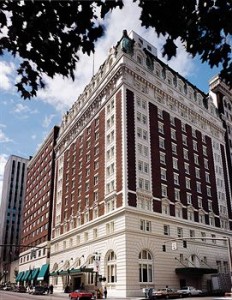 Here in Potland, Oregon, I’m staying at the Benson and it falls into that category. It’s a landmark here, known and beloved by the natives (at least those of an older generation) and is listed on the National Register of Historic Places. 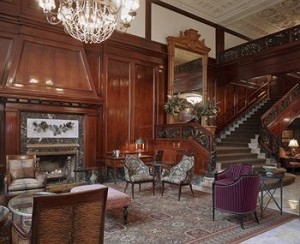 Here’s one corner of the lobby and the rest of the common areas have much the same look abouth them. The staff — at least those with whom I’ve come in contact — have been cordial and accommodating. Most are longtime employees. My waiter at breakfast, “Bobby”, has been at the Benson for 31 years.
The rooms are pretty standard but quite comfortable.   (By the way, what’s with the 18-inch wide strip of colorful fabric that one invariably now finds draped across hotel room beds?)
One final plaudit for the Benson: the Empire Builder doesn’t board until 4:15 or so this afternoon, but I was cheerfully granted a late check-out by the Benson’s front desk … a request granted rarely and then only grudgingly by most of the big chain hotels.
Next post: from Milwaukee on Thursday.