Finding a Dream in an Iowa Cornfield

Jim Loomis June 11, 2012 Baseball 0 Comment
Note: Regulars here know that I’m a big baseball fan. A few years ago, I made a pilgrimage to the Iowa farm that served as the location for Kevin Costner’s classic film, Field of Dreams. What follows is one of the stories I wrote about that excperience.
—————————————————————————
Dyersville, Iowa, with a population of just over 4,000 souls, lies in the eastern part of the state some 30 miles from Dubuque and well off the beaten path. Most people would probably consider Dubuque to be pretty far from that beaten path, too.

Dyersville, you see, is where a baseball field was carved out of a cornfield and became the setting for the film, Field of Dreams, in which the ghosts of Shoeless Joe Jackson and his teammates from the 1919 Chicago White Sox come back to play ball again.

The field is still here and, for reasons few are fully able to explain, every year thousands of people from all over the country are drawn to this little Iowa town to see it. 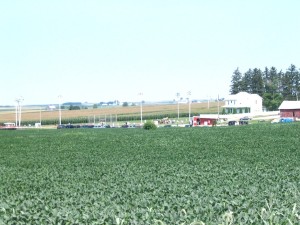 Approaching the Field of Dreams down a dusty dirt road from the east, my first glimpse is from the far side of a cornfield. But it’s not just any cornfield …it’s the very cornfield into which the ghost players disappeared after their games. Remember? “I’m melting! I’m melting!”

Everything is here, exactly as it appears in the movie: the weathered white farmhouse with the wrap-around verandah, the red barns in the background and, of course, the baseball diamond.

It’s late morning on a sunny summer day and there are more than 20 cars in the gravel parking area. Nearby, a dozen or so kids are patiently waiting in line for the chance to step up to the plate and swing at soft pitches being tossed by a man wearing a Red Sox cap.

Out in right field, a father and son are throwing a ball back and forth. After a while, they tuck the baseball gloves under their arms and begin walking in and out of the corn stalks that border the entire outfield.

In the shade of a large tree just off the corner of the farmhouse, a family of five has spread a blanket and is in the middle of a picnic lunch.

The Lansing family has owned this farm for a hundred years. Don Lansing, born and raised in Dyersville and the current owner of the property, surveys the activity going on all around him and smiles. “Pretty typical for a summer day,” he says.

Previous Daytime TV: Programming for a Nation of Morons.
NextFinding a Dream in an Iowa Cornfield – Part Two