Amtrak delays. Whose fault is it?

Ask a hundred Amtrak passengers what’s the biggest problem with long-distance train travel and I’ll bet you a box of donuts that the most frequent answer will be that trains often run late.

I’ll also wager that most of those people don’t know – and probably don’t care – that Amtrak doesn’t actually own the tracks they’re riding on. The fact is, except for the Northeast Corridor from Boston to Washington, Amtrak trains run on track owned by one of the major freight railroads. 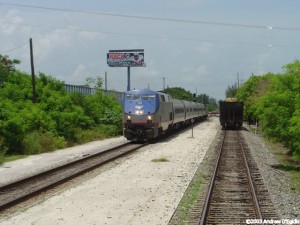 Yes, of course, sometimes delays are caused by equipment failure or weather conditions. But, most of the time, when Amtrak trains run late it’s because they are delayed by the dispatchers who put the passenger train on a siding until a slower freight comes by. But can we blame them? After all, it’s their track, be it Union Pacific or BNSF or CSX.

Well, yeah, actually … we can. According to federal law, passenger trains are supposed to be given priority. And Amtrak is even required to pay bonuses if the freights meet and surpass specific levels of on-time performance for Amtrak trains.

The trouble is, when there is a lot of freight traffic, any bonus the private railroad may get from Amtrak doesn’t begin to make up for the money they say they lose if their trains are delayed.

Truthfully, I’m not sure I believe that. After all, most of Amtrak’s long-distance trains only run once a day. So, for example, there are only four Amtrak trains running at any given time along the Southwest Chief’s route, two in each direction. How hard can it be -– really — to keep those four trains on schedule?

Furthermore, I’m convinced that sometimes Amtrak is delayed out of sheer spite. I was on the Coast Starlight a number of years back, and we sat on a siding somewhere in Oregon for almost a half hour. Finally, a Union Pacific freight lumbered by in the opposite direction and we were allowed to proceed … one whole mile into our next station! The conductor was fuming over what he said was a completely unnecessary delay.

For years, all any of us could do was grin and bear it. But the other day, Amtrak fought back, filing a formal complaint with the federal Surface Transportation Board against Canadian National Railway for habitually delaying Amtrak trains going in and out of Chicago. Good for you, Amtrak! And about damn time, too!