So far, Mongolia has been the biggest surprise of this journey, perhaps even the highlight. And without question, the most exhilarating experience in Mongolia occurred when we attended a performance by the Mongolian National Orchestra. 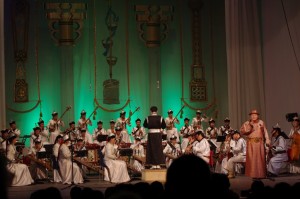 There were a few western instruments in the back rows, but almost all of the musicians were performing on traditional stringed instruments and what we would call “woodwinds”. There were also several instruments very much like the cimbalom featured in Hungarian music. In particular, there was a solo performed on an instrument fashioned from a long, curved cattle horn which produced a lovely sound much like a clarinet. The orchestra performed very traditional Mongolian music and other pieces in a style more familiar to the western ear. Either way, it was an unexpected and almost breathtaking experience. 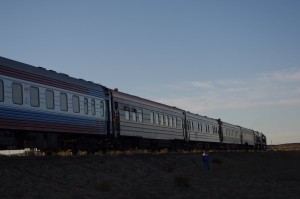 When I awoke early the next morning, the train had stopped for refueling and watering at a way station in the middle of the Gobi desert. (Technically, that’s a redundancy since “gobi” translates as “desert” in the Mongolian language.) There was time to get off and slog around out there … tough going in the soft sand that varied anywhere from one to 8-10 inches deep. 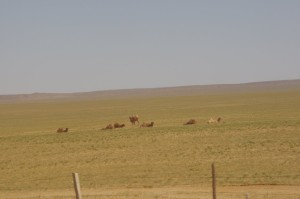 But it was easy going for camels. A Mongolian entrepreneur showed up by the train and, before we departed, was offering camel rides to a few of the passengers. Later, after resuming our run toward the Chinese border, I was able to get photos as we passed several small herds of camels. 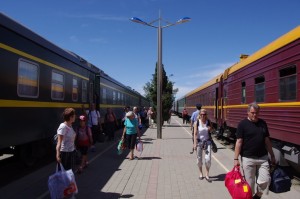 Way back several weeks ago, when my train from Berlin to Moscow crossed into Russia, the trucks (or “bogies” as they are called in Europe) had to be changed to accommodate the wider Russian gauge. Here, just inside China, the passengers were switched instead. We were transferred, bag and baggage from our private Russian train (on the right) to a Chinese train that would take us on the overnight run to Beijing. 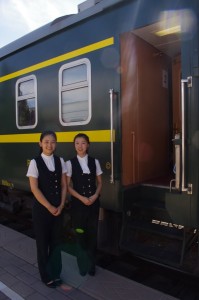 I am unable to resist adding here that each sleeping car on the Chinese train was staffed by two young female attendants, who were just as sweet and cute and nice as they could possibly be, notwithstanding the fact that their entire English vocabulary apparently consisted of “Good morning!” and “Good night”. Any other attempt at conversation produce and enthusiastic and, I have no doubt, quite genuine, “Welcome to China!”

Next: B is for Beijing … and for BIG!

Previous Day 22-24: Across Mongolia.
NextDay 27: An Eye-Opening Incident in Beijing