Notes and impressions from my recent rail journey — from London to Germany, Russia, Siberia, Mongolia on to China — now continues. Sorry for the interruption.

Mongolia has been another great surprise. Ulan Bator is a modern city, with apartment buildings, parks, cultural activities, and – at least as far as we could tell – universally friendly people. Of course, this comes from the perspective of someone from Hawaii where all outdoor advertising is banned, but I was struck, by the constant visual assault of signs and billboards that really give the city a tawdry look. How bad is it? 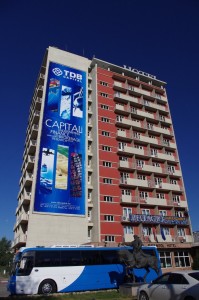 Well, the main entrance of our hotel in Ulan Bator is just behind that big tour bus. I’d say a billboard that big on the front of the hotel is just a bit over the top, wouldn’t you?

Our last day in Mongolia, we were driven to a National Park for a fascinating look at the lives of Mongolian nomads. They live in yurts – just one round room with fabric stretched over a wood frame – but pack everything up and move three or four time a year to provide more or better grazing for their cattle, horses, camels and sometimes sheep and goats as well. 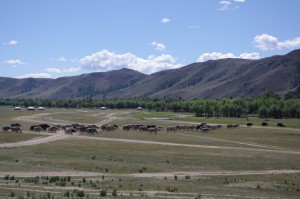 Once inside the park, we stopped for a look at a herd of yaks ambling across a valley below us on their way to a small river. Great big shaggy beasts. 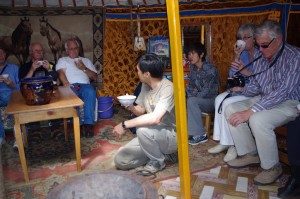 Just a couple of hours later, we had the unusual experience of being invited into the home of a Mongolian family where we were each given a small bowl of their beverage of choice: fermented mare’s milk. According to Timor, our guide, it would be unthinkable to decline and protocol required at least a small sip. I did my bit for international relations and was prepared for the worst, but it was not as bad as I expected. Think warm skim milk with a bite. 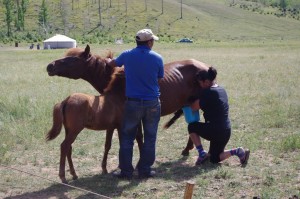 And here’s how a mare is milked: To start the flow, her foal is brought up to nuzzle, then is pulled back and a second person does the actual milking … but it takes three to tango: the foal and two Mongolians. 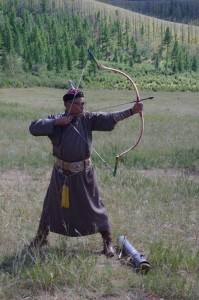 There was also an archery demonstration, with two men firing arrows at a bright red target not more that a foot square and probably 200 feet away. I didn’t keep count, but they scored hits at least 3 times out of five arrows.

The next morning, we continued on our train to the Mongolian-Chinese border, then transferred to a Chinese train for the overnight ride to Beijing. Next time: A very interesting incident in Tiananmen Square.

Previous CENSORED in China!
NextDay 25-26: Through the Gobi Desert to China