Those of us who have lived in Hawaii for more than a few years — for me, it will be 50 years in May of next year — can’t help bemoaning the relentless over-glamorizing of so many of the hotels here. As the renovations have added marble in the bathrooms and modern statuary and triple-tiered swimming pools, fewer and fewer of these posh resorts bear any resemblance to the wonderful, simple, real Hawaii we old timers remember so fondly. Happily, there are still some of the classic, traditional hotels around. 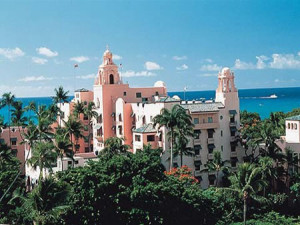 The grande dame of these classic hotels is the Royal Hawaiian Hotel on Waikiki Beach, affectionately known to all of us as “the Pink Palace”. Some years back, some numbskull at Sheraton corporate headquarters said that maybe it was time to do away with the traditional pink color of the Royal. Big mistake! The resulting screams of outrage brought an abrupt halt to that heretical notion. 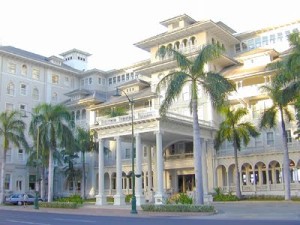 Another is the Moana Hotel, also in Waikiki, which came damn close to being torn down 15 or 20 years ago. Thankfully, it was not only renovated, but beautifully and lovingly restored to its original grandeur using the original architectural drawings from back in the 1920s … and at considerable expense, too. (Worth every penny!)

Here on Maui, sitting smack on Napili Beach, is the simple, two-story Mauian Hotel. The rooms are modern and attractive, but step into the middle of their central courtyard and you’ll think you’re back in the 60s, which is a delicious warm, comfortable feeling. Trust me: you can spend hours sitting on that incomparable beach just staring at Moloka’i across the channel. Their rates, by the way, are about a third what you’ll have to pay at one of those faux-ritzy places. 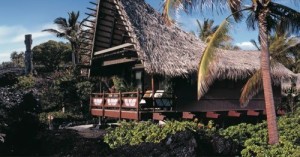 Then there’s the wonderful, incomparable Kona Village Resort on the Big Island. More than a hundred thatch-roof bungalows scattered over the lush grounds. Guests wishing privacy had only to place a coconut in front of their door … and the only television set available was in the bar. At any given time, more than half the guests were repeat visitors.

But here’s the thing: two weeks ago, the tsunami generated by the earthquake in Japan pretty much wrecked the place. More than 20 of the bungalows were swept off their foundations and there was great deal of other damage. Many of the employees had been at the Kona Village for 20 or 30 years, but all 200 have been laid off. We dread the thought, but it is possible that this wonderful treasure of a place might be gone for good. We dread even more imagining what might be built in its place. When and if that happens, more than a few tears will be shed.