Comes a Knock on the Door in the Wee Hours 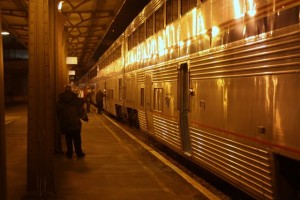 Ten days ago, at just after 5:00 in the morning, the California Zephyr was stopped at Omaha, Nebraska, on its daily run from the Bay Area to Chicago. Businessman Greg Travis, sound asleep in his roomette, was suddenly awakened by a knock on his compartment door. Groggy and still half asleep, Travis opened the door to be confronted by a Nebraska State trooper demanding to know who he was, where he was going and where he had been. Then, with Travis’ permission, his luggage was searched. Two or three other passengers on the same corridor were being similarly questioned.

After the fact, once the Zephyr was underway again, Travis had second thoughts about the experience. In fact, he was quite thoroughly pissed. “If I had my wits about me,” he later told a reporter for an Omaha TV station, “I might have said, ‘No, I don’t want you looking through my dirty underwear.’”

I confess I don’t know what I would have said or done under those circumstances. But since the police offered no explanation and had no search warrant, I hope I would have had the presence of mind to tell that cop to f— off! Of course, I have no idea what might have happened next.

There have been similar stories from passengers traveling on the Lake Shore Limited which runs close to, but does not cross, the Canadian border … immigration officials boarding the train in the middle of the night and demanding to see IDs from some of the passengers.

Am I completely off base in thinking these incidents are outrageous? What the hell is going on here?