Amtrak, High-Speed Rail, and Pols Still Don’t Get It. 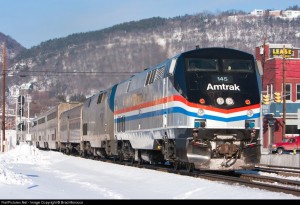 Looking sharp! Amtrak has unveiled a new color scheme for their locomotives, reverting to an up-dated version of the red-white-and-blue striping that was used a number of years back. Handsome, isn’t it! I don’t know about you, but I will never stop feeling a thrill when one of those wonderful machines rumbles into a station … especially when it’s about to take me somewhere. 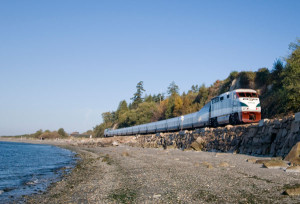 If you build it (and run them), people will come. One of Amtrak’s biggest success stories is their Cascades service, running between Portland, Oregon and Seattle, Washington, with twice daily service on up to Vancouver, BC … a 10 percent increase.It’s astonishing to me that the anti-rail people continue to say that no one wants more and better trains. Once again, Amtrak has announced another increase in ridership: almost 29 million passengers in their most recent fiscal year.

And, on that same subject, I chafe whenever I see that the anti-rail people cite as their source someone from the Cato Institute. This is a Libertarian “think tank” which invariably offers knee-jerk opposition to any new initiative by government, no matter how necessary or sensible. That is, after all, the essence of their ideology.

People really do want high-speed rail! A new poll on the subject of passenger rail – and specifically high-speed rail — has produced some surprising results: most Americans have only a foggy understanding of high-speed trains. And why should they? Only 30 percent of us even own a passport and most Americans have never, ever ventured beyond our own borders, even to Mexico or Canada. That means that a very small fraction has ever had the chance to experience high-speed trains. But here’s what’s so interesting: despite those seemingly discouraging numbers, the poll reveals that a very solid majority of U.S. citizens are in favor of more and better and faster trains. Whaddaya know! There is hope after all! 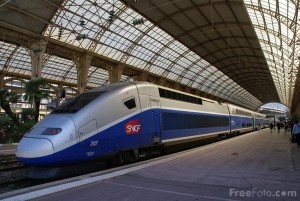 Words from the wise. And here’s a great on-point quote from William Withuhn of the Smithsonian: “America doesn’t get rail transportation. The politicians don’t understand trains because most have never ridden one. The press is all caught up in Amtrak not making a profit as if that’s somehow remarkable. Roads and airports don’t make money either…In the meantime, other countries–lots of them now–have moved ahead and built these sleek, efficient and awesome machines. They get rail, but we don’t.”

Here’s an idea: Let’s make all the anti-rail politicians actually ride some trains … first on the French TGV, then on Amtrak. At the very least, it’ll make them think twice before they start blathering about how we’re so much smarter than everyone else.

Previous A New Law Is Signed … and Sealed With a Kiss.
NextSome Unforgettable Travel Experiences