Amtrak Knows How to Deal With Problem Passengers. 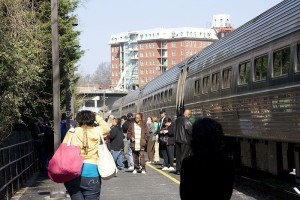 I came across a news item this morning about a boozed-up jerk who boarded an Amtrak train in California and began causing problems.

Incidents like this don’t happen very often, are handled quickly and quietly by Amtrak crews, and usually go unnoticed by the rest of the passengers.

Most of the infractions involve the flouting of Amtrak’s strict no-smoking policy. I remember one conductor who used the train’s PA system to remind passengers that smoking is not permitted anywhere on board. He concluded his announcement by saying, “If you are found smoking on board this train, the very next stop will be yours.”

And they aren’t kidding. Passengers violating the smoking prohibition or who cause trouble in other ways are indeed put off trains. And that means bag and baggage, with no refunds.

Troublemakers are given one warning and told firmly to shape up. According to a veteran conductor, the secret – especially if the troublemaker could physically resist – is never informing them that the decision has been made to put them off at the next stop. When the train reaches that next station, two conductors appear with his baggage and say “Off you go.”

In some cases – especially if the troublemaker is belligerent – the conductors will have the engineer contact the railroad’s dispatcher and arrange for police to meet the train. I was on a western train one time when a passenger was drunk and loud and being quite aggressive. It was several hours to the next scheduled station stop, so Nevada state troopers met and boarded the train at a highway crossing in the middle of nowhere. When last seen, the drunk was in the back seat of a police cruiser on his way to the slammer in Caliente, Nevada.

Again, I want to emphasize that incidents like these are, in my experience, not very common. And, when problem passengers do surface, Amtrak crews deal with them quickly and very effectively. And good for them, too!

Previous Introducing A New Generation to Amtrak
NextNARP has the FACTS about high-speed rail.