BALTIMORE — I guess you are aware that there have been no regular posts here for several days … several very frustrating days for me! Here is a short version of the story:

After two nights on the Califoirnia Zephyr from Oakland to Chicago and a third aboard the Lake Shore Limited, I arrived in Boston and checked into the little B&B where I stay on these pilgrimages to see the Red Sox play at Fenway Park. The B&B is a five minute walk from the ballpark and, coincidentally, one block down the street from the fraternity house where I lived as a Boston University student many years ago.

The next morning, I trotted around the corner to a little bagel shop where patrons are encouraged to order a bit of breakfast, set up their laptops and surf the internet to their hearts content. So far, so good.

There were several wireless networks available for internet connection but, for whatever reason, my laptop insisted on defaulting to the Boston University system. (“A lot more bars, I guess,” said one of the techies I spoke to about this.) I had discovered that after composing — would I lie? — a brilliant post about my travels across country on those two Amtrak trains. When I went to “publish” the post, up popped the home page of the BU network and all those words had disappeared into the ozone. 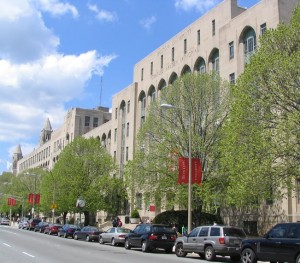 But here’s the catch: Internet access via the BU system is only for students, faculty and visiting academics attending conferences at the university. It did seem to me, however, that since their system was preventing me from using any other system, it might be OK for someone in authority to give me a three day pass to use their system … the same privilege they give visiting conference attendees. After all, I am an alumnus — School of Communications, Class of ’59 — and a regular albeit modest contributor to their annual campaigns.

Nope. Not a chance. And, believe me, I tried … hoofing it on a very hot day from the IT Department to the Alumni Office to the Development Office and then by phone (because I was just to damn hot and tired to walk any more) to the President’s Office. Everyone was sympathetic and understood my problem, but no one would give me a freakin’ temporary password!

And so, I fretted for three days, unable to post here and unable to send or receive email.

(It is quite true, that I could have packed up my laptop, taken the Boston transit system a couple of stops toward downtown, walked two blocks to Newbury Street and settled in at some other bagel shop, but I was just too damn mad and could not bring myself to do that.)

At any rate, my apologies for the long silence. I will do my best to make up for it over the next couple of days, although I will be back in the train again on Sunday en route back to Chicago.

And, by the way, I can hardly wait for the next appeal I get from the Boston University Development Office!

Previous The Lousy Economy: Up Close and Personal
NextCrossing the Country on Amtrak – West to East