Crossing the Country on Amtrak – West to East

My latest trans-continental trek via Amtrak began on a chilly, overcast morning at the Emeryville, California, train station. The California Zephyr departed on time at 9:10 a.m. for the three-day, two night run to Chicago. By late that afternoon, we had made the spectacular crossing of the Sierra Nevada range over Donner Pass, stopped at Truckee, and were trundling across the Nevada desert with Reno just behind us. 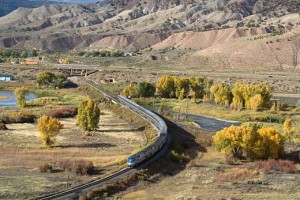 It was still very hot outside. So hot, in fact, that we were running at reduced speed in case the guys in the head end spotted any heat kinks in the rails up ahead of us. There were also several spots where we slowed to 10 or 15 mph while crossing newly-laid track.

As things turned out, there would be a lot of track work going on for the entire run from the Sierras all the way to the Mississippi River. Gangs of workers and all kinds of machinery were ripping up old track, replacing weathered wooden crossties with new concrete ones, and laying down new rail. Fascinating to see, but the resulting slow orders, plus the usual delays for freight traffic, would nibble away at our progress until we were more than three hours late by the time we crossed into Illinois for the final four-hour run into Chicago.

There was a lot of angst among many of the passengers on board … folks with connections in Chicago to other Amtrak or commuter trains. There was also a contingent of 15 or 20 people on a tour who were going to be dashing out to O’Hare for plane connections to the East Coast. For a while, until it became clear that most of the delays were behind us, I was sweating out my connection to the Lake Shore Limited. My comfortable five-hour lay-over had shrunk to just over one hour and any further delays could have put a normally safe connection in doubt.

I made the connection to the Lake Shore with no problems, but all of this reminded me again of an observation I’ve made on other trips: Amtrak operating crews –meaning, in this case, the conductors — seldom seem to show any concern when trains begin to fall behind in their schedules. Most will inform passengers of the delays, but en route, as were kept falling farther and farther behind schedule, there was no obvious effort to hurry up the detraining and boarding process at stations along the way.

We even continued to observe the “smoking stops”, where smokers are given 10 minutes or so to light up on the platform at several station stops along the way. In fairness, most of those are scheduled stops where there will be a crew change anyway, but the point is that there never seemed to be any effort to hurry through those stops with an eye to making up a few minutes. In fact, there were several stops where only three of four people got off or on and we were still in those stations for 10 or 12 minutes.

It seemed to me that, had there been an effort all along the way to speed things up, we might well have reached Chicago 30 to 40 minutes sooner. At it was, we were 3:45 late, but perhaps a half hour or so would have made the difference for more than a few of the passengers trying to make connections.

(Yes, I should acknowledge here that there is padding built into the schedules, but by the time we were into our second day it was clear we were still going to be very late into Chicago, padding notwithstanding. )

One more point on this issue: late trains cost Amtrak a helluva lot of money every year. The end up paying for hotel rooms, meals and shelling out for special bus transportation to accommodate passengers inconvenienced by late trains. The cost of all that accommodation? Well, the most recent number I heard was $130 million a year. Wouldn’t you think that would be an incentive for those conductors and station agents and baggage handlers to hustle late trains through those station stops?

That said, late or not, it was a good trip. I still maintain that the Zephyr is the most scenic of all the Amtrak trains,(although the Coast Starlight is a close second) and I enjoyed it all, every mile of the way, even those we did at 10 miles an hour.

Next: Chicago to Boston on the Lake Shore Limited.

Previous Off Line, Out of Sight, and Out of (My) Mind!
NextJust Another Republican Who Wants It Both Ways