Harry Truman was trailing badly in the 1948 presidential campaign, but he took his case directly to the people of small-town America by train … and he won.

Senator Barak Obama has taken a page from President Harry Truman’s book and is campaigning through Pennsylvania on his own whistle-stop tour aboard a four-car train hauled by twin Amtrak locomotives. 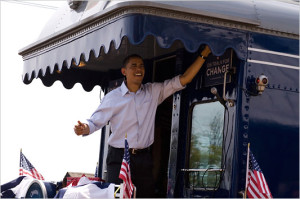 This is being written before the results from the Pennsylvania’s Primary Election are in, so we don’t know yet how effective Obama’s whistle-stop campaign will be.

But, as a rail advocate, it’s nice to know there’s at least one candidate who understands that you really gain a true understanding of this country from the window, or the observation platform, of a train.

Previous My Favorite Train Ride: The Empire Builder
NextPresident Harry Truman Got It